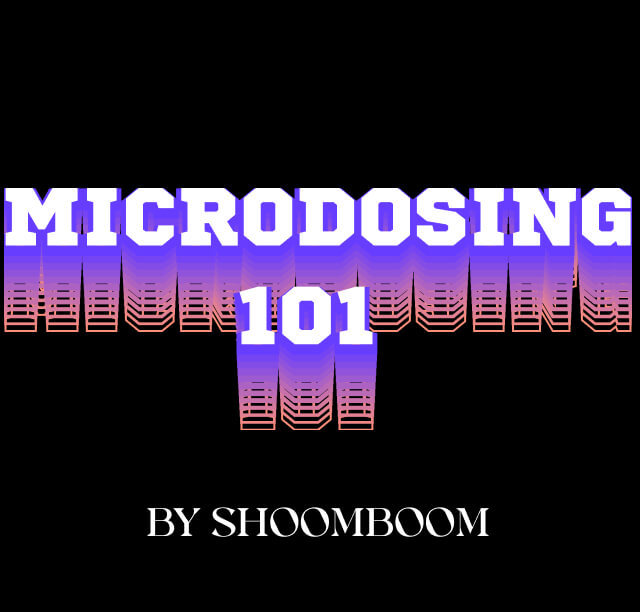 All magic, no trip.

Everyone—from Gen Z web3 fanatics to boomers who work in accounting—is talking about microdosing mushrooms. The buzzy practice is a legit phenomenon, and while taking a tiny bit of hallucinogens on a work day sounds crazy, microdosing may actually help make people feel sane.

If you haven’t yet jumped on this bandwagon because the idea of regularly taking psychedelic drugs feels understandably daunting, keep reading for a primer on the practice that will demystify the experience and help you determine whether or not it’s your bag of 'shrooms.

The psychedelic shrooms people use to microdose are called Psilocybe cubensis, and they contain psilocybin, a hallucinogenic compound. While ingesting psilocybin did not become famous stateside until the 1960s, it is an ancient practice that people across cultures in Central and South America have utilized medicinally and ceremonially for thousands of years, and some scientists even believe it aided in human evolution. What makes the compound so special is that when it is consumed, psilocybin can alter perception, creating experiences often reported to be life-changing.

According to psychedelics coach James Eshleman, a typical dose of psilocybin, known as a macrodose, is any amount over one gram. WIth a macrodose, you can expect a singular “trippy” experience that may feel expansive or mind-opening and can include long-lasting aftereffects, such as improved mood, which are believed to result from psilocybin's ability to help your brain form new connections.

It is important to note that psilocybin has been illegal in the U.S. since 1970, when it was classified as a Schedule I drug with a high potential for abuse. However, unlike other drugs that have earned this classification, magic mushrooms have not actually been found to produce drug-seeking, or addictive, behaviors. Accordingly, some researchers have suggested that psilocybin be reclassified as a Schedule IV drug, a status shared by medications such as Xanax and Ambien.

Psilocybin’s legal status has stunted scientific research on both its benefits and risks for decades, but such research has recently resumed at institutions like the Center for Psychedelic and Consciousness Research at Johns Hopkins Bayview Medical Center in Baltimore. So far, the data suggest that psilocybin may have significant potential as a treatment for depression, anxiety, post-traumatic stress disorder, addiction, and other mental health issues, with limited (but not zero) potential risks.

As evidence of these benefits increases, voters and lawmakers in some parts of the U.S. have begun to decriminalize psilocybin, so citizens of those cities and states will no longer face criminal charges for possession or use of the 'shrooms. In some places, such as in the state of Oregon, voters have gone even further, enacting measures that make psilocybin legal but only for use in regulated therapeutic settings.

All set on 'shrooming. What is microdosing?

Microdosing is a significantly different experience from macrodosing. Rather than ingesting one large dose of mushrooms that results in a trip typically lasting around six hours, a much smaller dose, around one-tenth to one-twentieth the macro amount, is taken. “Microdosing entails taking a sub-psychedelic dosage of psilocybin mushrooms, generally anywhere from 0.1 to 0.3 grams,” says Eschelman. Ideally, this is done on a schedule. For example, you may opt for five days on a microdose and two days off or Eschelman’s preference of one day on and one day off.

The effects of these small regular doses are far more subtle than the effects of a macrodose. In fact, they're sub-perceptual, or not really noticeable, but Eshleman says their benefits accumulate over time. “With microdosing, I like to look at it as a cumulative experience where every day builds on the previous one,” he says. “So over the course of an extended timeframe, there's compounded interest and you see extensive growth [of new neuronal connections] over six months to a year.”

While the practice of microdosing was popularized in modern times by James Fadiman’s 2011 book The Psychedelic Explorer’s Guide, which delves deep into the purported benefits of taking small amounts of psilocybin and describes potential microdosing regimens, it likely existed long before then. In more recent years, it has exploded in popularity thanks in part to Silicon Valley influencers who've adopted the practice as a form of biohacking or performance optimization.

Cool! So how, exactly, does one microdose?

Everybody's body reacts to psilocybin differently, so when embarking on a microdosing regimen, it’s important to exercise caution. Start with the smallest dose, 0.1 gram, and test initial microdoses on days when responsibilities are minimal. If possible, consult with an expert, like Eshleman.

As far as scheduling your regimen, you can try any type of pattern you’d like, including Eshleman’s suggested regimen of one day on, one day off, but it’s not advisable to microdose daily. “Taking psilocybin everyday causes tolerance to build up and leads to diminishing returns,” says Eshleman.

Groovy! But are there *actually* benefits, or is this just another overhyped health fad?

When it comes to learning how and why microdosing magic mushrooms may be beneficial to the human mind, scientists are at a distinct disadvantage. Federal and state laws prohibit researchers in the U.S. from giving test subjects the drug to use at home, and testing within a lab setting doesn’t emulate real life, according to Albert Garcia-Romeu, a researcher at the Center for Psychedelic and Consciousness Research. And when researchers survey folks about the effects they’ve experienced on tiny doses of magic mushrooms, they can’t control for the amount people are consuming, which is a real bummer for anyone who values a true scientific method.

Still, there is significant anecdotal evidence that the practice can positively affect mental well-being. The self-reported advantages of microdosing included enhanced creativity, greater clarity and focus, reduced anxiety and depression, improved self-awareness, a more positive outlook on life, and improved social engagements, among others.

A 2020 review published in Therapeutic Advances in Psychopharmacology found some evidence of these perceived effects by looking at the results of 14 small experimental studies conducted on “healthy” individuals. These microdosers reported subtle positive changes in their emotions, including better problem solving while on a microdosing regimen. And yet another tiny European study found that folks who microdosed on psychedelics for several weeks exhibited more awe when viewing videos and artwork compared to those in the placebo group.

The elephant in the room is the placebo effect. In one study of 200 LSD and psilocybin microdosers, researchers gave a portion of the group a placebo without their knowledge and found significant reported psychological benefits in microdosers and placebo-takers alike. In other words, those who thought they were taking the drug benefited just as much as those who were actually taking the drug.

Ultimately, more robust scientific research is needed to truly understand and legitimize the effects of microdosing psilocybin, but when *literally everyone* is saying the practice has changed their lives, it's hard to deny that something is benefiting the brains of microdosers. And now that you're better informed on the ins and outs of the practice, it might be time to experience whatever that is firsthand by giving your own mini mushroom regimen a try.