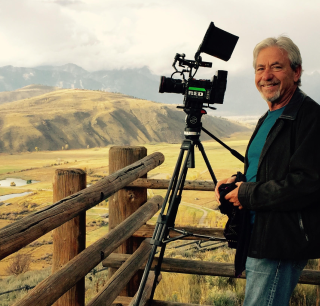 Louie Schwartzberg is back with a new film. Here's why he thinks its subject could help save the world.

This conviction, bolstered by thousands of hours of life-affirming footage shot by the prolific director and visual artist over decades, is the reason Schwartzberg chose to follow his hit film Fantastic Fungi—a must-see about the magic of mushrooms—with Gratitude Revealed, a new documentary debuting in select theaters September 16. “Most entertainment is based on fear and violence, and we have to stop putting that negative energy into our hard drive, into our brain and our soul,” he says. “Just for a moment, we need to turn it off and say, ‘What can I be grateful for?’” Schwartzberg’s hope is that his new film—composed of years of his awe-inspiring footage of nature combined with interviews of various luminaries—will help people do just that.

As the son of Holocaust survivors, Schwartzberg began at an early age to value what others may not. “I learned a lot about appreciating the little things in life,” he says. “And that can make you an environmentalist because you become much more aware of things like bees, which are critical for pollination, and fungi in the soil. You end up being conservation-oriented.”

But Schwartzberg’s career didn’t begin with bees or fungi in soil (though it would eventually get to both). Instead, it started with the Vietnam antiwar movement, which took place at a pivotal time in his life. While studying political science at UCLA, Schwartzberg began submitting photographs he’d taken at protests in lieu of assigned papers. “I found my voice and fell in love with photography,” he says. 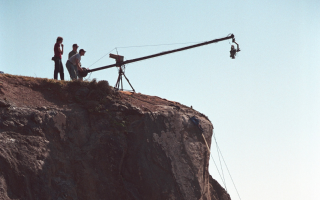 Before long, Schwartzberg enrolled in fine art photography courses, which helped expand the scope of his work into more creative realms. “I started to experiment with doing time-lapse film, which had never been done before in 35-millimeter,” he says. Most often, he found himself filming nature, focusing on subjects like the aforementioned flowers and fungi. “That helped develop my sense of wonder,” he explains.

Once out of school, Schwartzberg worked on commercials and music videos, such as Michael Jackson’s “Smooth Criminal,” to pay the bills, but eventually he began licensing his time-lapse footage to advertisers. That side business grew into a larger company, Energy Film Library, which encompassed not only his own work but also the work of over one hundred different filmmakers and studios. In 1996, Schwartzberg sold the company to Getty Images.

The sale enabled Schwartzberg to return to his roots as an independent filmmaker. Though he acknowledges his work is best characterized as documentary filmmaking, he prefers to describe each project as “a celebration of life.” “My films are about making the invisible visible and unlocking the secrets of nature's intelligence,” he says. His revelatory projects include the popular Disneyland attraction Soarin’ Around the World, which features aerial footage of what Schwartzberg calls “the most sacred places on the planet,” and Disney’s 2011 movie Wings of Life, which stars Meryl Streep as the voice of a flower seducing bees, bats, hummingbirds, and butterflies. “I call it a love story that feeds the earth,” the director says.

While making Wings of Life Schwartzberg started thinking about the other elements, beyond pollination, that plants need to thrive, which led him to fungi. “Most people don’t know where soil comes from—they’re clueless about the ground they’re standing on,” he says of fungi that break down organic matter, minerals, and rocks to create food for plants. Schwartzberg quickly became fascinated by the fact that in one cubic inch of soil, there can be miles of mycelium, the underground root-like structure of a fungus that plants use to communicate with one another. “This underground community is a beautiful model for our survival because it's an economy not based on greed but based on sharing, so that ecosystems flourish,” Schwartzberg says. “It’s nature's operating instructions.”

Inspired by mycelium, Schwartzberg dove into learning more, including how the oldest fossils on earth belong to fungi; how humans are more closely related to fungi than to plants; and how mycelium may be the greatest natural solution to climate change because of its ability to pull carbon out of the atmosphere. The director found these facts so, well, fantastic that he decided to combine them with his years of time-lapse 'shroom shots to create Fantastic Fungi. The film also includes commentary from experts, such as mycologist Paul Stamets, integrative medicine expert Andrew Weil, nature and food journalist Eugenia Bone, and mycological influencer William Padilla-Brown. Well-received at its premiere, the film has since been released on Netflix, making it accessible to a global audience. “Everywhere I’ve been around the world, people have seen it,” Schwartzberg says.

The documentary’s overwhelming popularity inspired Schwartzberg to expand Fantastic Fungi into a brand. “I want to celebrate everything mushroom, from visuals to artwork to products, like mushroom jerky, coffee, and chocolate, and bring our audience to young companies just getting started in the space,” he says. The robust online marketplace at fantasticfungi.com centers on mushroom-based supplements, snacks, beverages, and swag. It also includes the Forager Box, a curated selection of 'shroomy products available as a one-time purchase or quarterly subscription.

And this is only the beginning of a larger 'shroom-centric movement, according to Schwartzberg. “I’m continuing to grow Fantastic Fungi as a franchise and be a part of this awakening moment,” he says. To that end, the filmmaker has also been helping researchers at the Pacific Neuroscience Institute and UCSF study the benefits of psilocybin in experiments which utilize his film footage.

Though these studies—and all things fungi—have kept him busy in recent years, Schwartzberg never abandoned his primary passion for filmmaking. At the beginning of the pandemic, when shooting as he normally would became difficult, he decided to instead cull through the nearly 2,000 hours of footage he’d already accumulated over the years. What he found inspired him to begin what would become Gratitude Revealed. “I realized I’ve always been capturing these magic moments that encapsulate the values that add up to gratitude—curiosity, wonder, creativity, generosity, forgiveness, love, connection, and patience,” he says.

Schwartzberg pulled the best of those moments from his years of footage and then sat down with individuals, such as Deepak Chopra, Norman Lear, Brian Grazier, Brother David, and InQ, to round out his footage with their insights. He describes the resultant film as a journey “kind of like from birth to death,” wherein he explores the values he considers to be the building blocks of gratitude. “I didn’t try to make a film that defines gratitude,” he says. “This is just my journey I’ve captured that I’m sharing with you.”

Through this journey—and with all his films—Schwartzberg seeks to connect with the audience. “I want to create an immersive experience, similar to what sacred medicines do, so that people can sense a feeling of oneness,” he says. He has honed this inventive approach to filmmaking over time as he's seen traditional messaging, or simply relaying facts, fail to breakthrough or inspire meaningful change, particularly with respect to the climate crisis. “The truth doesn't matter, as we're learning now with fake news and politics,” he says. “What I'm trying to do is create an emotional connection, so that people will do whatever it takes to make the right choices to protect the environment because we are the environment—I'm trying to show people how deeply it’s all connected.”

Schwartzberg hopes this feeling of connection and his new film serve as a catalyst for the practice of gratitude, which he believes can shift neurological pathways in the brain away from negative rumination. Schwartzberg sees gratitude as an antidote to a despair humanity can’t afford to succumb to given the momentous challenges at present. “We are going through some tough times right now, and I think we have to be aware of it, but I don't think we should throw in the towel—we need to be strong and resilient,” he says. In his opinion, gratitude is one of the most important tools at our disposal for building such grit. “There is clearly a need for a shift in consciousness on the planet, and I want to be on the side of hope,” he adds.

For Schwartzberg, the simplest way into gratitude—and ultimately that important shift—is one he discovered early on by filming nature so closely over time. “I can just observe the way the light hits a leaf, which makes me present and grateful for the miracle of that leaf and that tree and the fact that I’m here,” he says. And while you don’t need a camera to emulate this practice, Schwartzberg hopes the years he’s spent behind one, gathering footage for this new film, will inspire your own sense of gratitude and an urge to help save the natural world he loves.

Gratitude Revealed opens in select theaters September 16. On World Gratitude Day, September 21, there will be virtual screenings followed by a Q&A in Europe and North America. For more details, visit www.gratitude revealed.com.