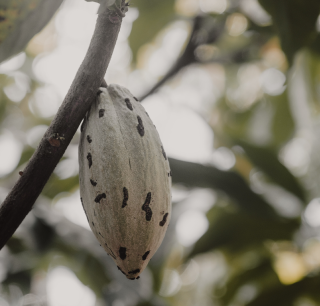 Plus, a mushroom chocolate recipe from our friends at Rainbo.

With a relationship rooted in ancient history, cacao and mushrooms have a profound connection. The official name of the cacao tree is theobroma cacao, made up of the greek roots theo (“god”) and broma (“food”), to mean “food of the gods." Growing native to Mesoamerica, the theobroma name can be traced back to the time of European exploration and conquest of the region now known as Southern Mexico. "Food of the gods" came from interpretation of how the indigenous referred to the plant, as it was evident cacao had divine status, conveying its central importance in their culture. After observing the reverence received by the cacao plant, the Spanish brought the beans back to Europe where eventually the sweetened form of chocolate as we know it developed. The word chocolate, however, can be traced back to the word “chocolātl” from the Nahuatl language of the Aztecs, meaning “bitter drink." The Aztecs held cacao in the highest esteem, and a bitter beverage was commonly made from the plant for use in ritual and religious ceremony reserved for the upper echelons of society.

The Nahuatl language also offers insight into other sacred foods that were used in ceremony such as the teonanacatl mushroom, which translates to “flesh of the gods.” A fungus of divine status, the teonanacatl mushroom refers to psilocybe mexicana, a psychedelic mushroom also found native to Mesoamerica. It is well documented that these consciousness-expanding mushrooms were consumed together with cacao in ritual. The food of the gods nourishing the divine communion with the flesh of the gods.

The origins of cacao: the sacred plant

Archaeological evidence of cacao residues found in ritual drinking vessels dates as far back as over 4000 years ago to the pre-Colombian cultures of Mesoamerica. In the Mayan and Aztec cultures, the use of cacao is featured prominently in old texts and engravings. The cacao beans were so valuable, they were used as currency—Spanish explorers documented that one cacao bean would buy a tamale, 100 beans for a fat turkey. The typical ceremonial preparation involved fermenting and roasting the cacao beans, grinding them into a paste and mixing the paste with water, chili peppers and corn, to then be poured back and forth between pots at a height until a frothy foam formed. 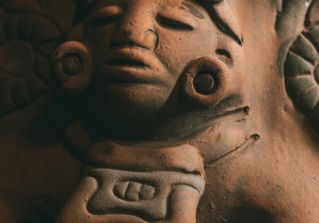 Thought to be a powerful aphrodisiac and mood-altering plant, the fermented cacao beverage was an integral part of their religions—appearing in spiritual ceremonies, in marriage, and in death rites and sacrifices. The cacao plant was seen as a divine teacher and agent to help access higher states of consciousness, love and unity. Both the Maya and the Aztec associated cacao with different gods. The indigenous Aztecs saw cacao as a divine gift from the peaceful god Quetzalcoatl, the feathered serpent. In Mayan culture, cacao was a part of the creation myth, being one of the foods that the Mayan god used to create human beings.

The connection to mushroom magic

Study of these ancient Mesoamerican cultures reveals that cacao has an established history of being consumed in combination with other ritualistic foods, especially psychoactive plants and fungi. In magic mushroom ceremonies, the Aztec would combine teonanacatl with cacao to be served as a mushroom-cacao mixed beverage. In other cases, the mushrooms were eaten alone and followed by cacao drinks in order to continue heightening the psychoactive effects. It was thought that the qualities found in cacao help to potentiate and guide the spirit of the mushroom experience. The synergistic effects of cacao and mushrooms have become an anecdote thousands of years old.

In modern times, the mushroom-cacao ritual is still intact in Mexico. The famous visit of Gordon Wasson to Maria Sabina in her home village outside of Oaxaca Mexico in 1955 involved Wasson’s reception of a cacao beverage with teonanacatl. Wasson’s experiences with the psychedelic mushroom were later published in 1957 and helped to usher in the psychedelic era.

We made a Mushroom Chocolate recipe here that you can try out.

The science of raw cacao

The cacao traditions of the ancient Mayas and Aztecs can be substantiated by our current understanding of the cacao plant. The indigenous cultures revered cacao as a sacred, mood-altering plant, an aphrodisiac and a potentiator of magic mushroom ceremony. We now know that cacao contains small amounts of enzyme inhibitors, called MAO inhibitors, that are capable of slowing the breakdown of the psychoactive compounds found in teonanacatl mushrooms, thereby perpetuating or amplifying the effects. Not only in combination with mushrooms, but consumed alone cacao remains a very chemically complex food with both mind and body-altering effects.

The enhancement of mind and mood can be attributed to many compounds found in cacao including:

Caffeine: found in small amounts in cacao, the alkaloid caffeine is a potent stimulant of the nervous system.

Theobromine: the primary, bitter alkaloid found in the cacao plant, in amounts two times more than caffeine. It is a cardiovascular stimulant, increasing heart function and blood flow and has about one quarter the stimulating power of caffeine.

The cardiovascular and heart-enhancing effects have been shown to be due to:

Antioxidant polyphenols: a group of protective chemicals found in high concentrations in cacao. The polyphenols help to reduce the oxidation of LDL (bad cholesterol), as well as inhibit blood platelets from clumping together, lowering blood pressure and reducing the risk of cardiovascular disease. Raw cacao contains more antioxidants than any other food.

Cacao as an agent of sex, love and bliss can be interpreted through an understanding of the following compounds:

Serotonin: Cacao contains serotonin, as well as the ingredients (magnesium and tryptophan) to boost the body's production of new serotonin. The neurotransmitter plays a major role in positive mood, balancing of stress, and increased sexual excitation, desire, and responsiveness—a sexual sweetener between partners to enhance the sense of closeness.

Magnesium: is found in high levels in cacao, and is the key mineral for relaxation of the muscles.

PEA: the love molecule, or phenylethylamine, is a neurotransmitter produced naturally in the body when we fall in love. It works to stimulate the brain’s pleasure centers, producing feelings of attraction and giddiness. PEA is found naturally in raw cacao.

Anandamide: a neurotransmitter found in cacao that when released in the brain produces a feeling of euphoria. Named the “bliss chemical”, cacao also contains enzyme inhibitors that inhibit the breakdown of anandamide in the body, thus further contributing to sensations of “bliss” associated with raw cacao.

The food of the gods indeed.

This article was contributed by our friends at Rainbo, purveyors of high quality functional mushroom products.