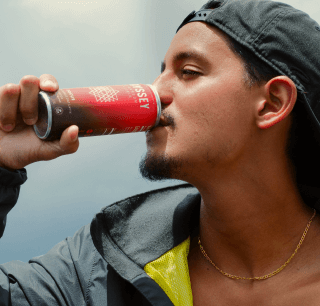 “When you drink these drinks, the sky looks bluer and the trees look greener.”

The first time Scott Frohman tried adaptogenic mushrooms, he experienced a notable boost in his well-being and was immediately converted into a 'shroom evangelist. Two years later, he officially launched his functional mushroom beverage company, Odyssey Elixir, with the goal of spreading the spores of his obsession.

The fact that Frohman’s journey is not exactly atypical in the functional mushroom space is a testament to just how much actual substance there is to this particular trend (and science says so, too!) Certainly, every day there are individuals who spot a wellness fad and jump on the bandwagon—whether they believe in its health benefits or not—simply because they stand to make a profit. But Frohman is a legitimate mushroom devotee, who believes so strongly in the benefit of 'shrooms that he personally peddled his first product prototypes door to door, looking for any opportunity to meet and connect with customers in an effort to improve their health in the same way his had been transformed.

Frohman's odyssey began with at-home experimentation. After a friend introduced him to a mushroom powder supplement, Frohman started adding it to his coffee, and the benefits were immediately apparent. “Caffeine has always affected me negatively, but with the mushrooms, I felt great,” he says. “I experienced a more sustainable energy boost and started to feel that my brain was functioning better; I was clearer, more focused, in a better mood, and my stomach wasn’t bothering me like it had been before.”

Back then, Frohman and his colleagues in South Florida, where he still lives and works, had a daily afternoon ritual of sharing high-octane Cuban coffee, a local favorite. When Frohman began replacing that PM boost with mushroom powder mixed into hot water, he was pleasantly surprised. “It was a great pick-me-up,” he says of his caffeine-free potion. “I was able to focus and be in an elevated state but without the anxiety and jitters.” His coworkers took notice, and eventually he was brewing mushroom beverages for the entire team. 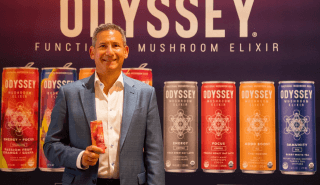 For Frohman, a seasoned entrepreneur who has sold successful CBD and hemp brands, jumping into the functional mushroom space was an obvious choice for his next professional venture. But he wanted to create adaptogenic mushroom products consumers would actually enjoy rather than just dutifully incorporate into their daily supplement routines. Coffee beverages were a natural first entry into the market given they’d been his initial inspiration, and Frohman launched the first Odyssey Elixir products, 'shroom-infused lattes and teas, in June of 2021. Serving as his own salesman, Frohman says, “I sold $12,000 worth of product in two weeks in June. I doubled that in July, and sales just kept going up.”

He chose Odyssey Elixir’s initial beverage types specifically because the strong flavors of coffee and tea made it relatively easy to mask the earthy taste of mushrooms. Then he came across a game-changing company using new technology to make high-potency mushroom extracts without a flavor that needed to be masked. This innovation opened up a whole new realm of possibilities. “Energy drinks typically have around 300 milligrams of caffeine, which adds to anxiety, but I wanted a better-for-you energy drink,” he says. So Frohman set out to create a 'shroom-boosted sparkling drink with only 85 milligrams of caffeine and all organic ingredients: lion's mane for cognitive function, focus, and clarity, cordyceps for mood and energy, and fresh fruit. “I wanted to make these delicious-tasting sparkling drinks that are incredibly elevating,” he says.

Frohman finalized his new beverages just in time for the October 2021 Expo East, an annual trade show of products in the food, beverage, beauty, and wellness spaces, and the drinks were an instant hit. By December he’d hired distributors, and Odyssey Elixir’s four flavors of sparkling beverages—including the just-launched orange ginger flavor—are now stocked alongside the company’s other coffee and tea offerings on approximately 2,500 store shelves across the country.

Odyssey Elixir’s growth isn’t surprising given just how much people love sparkling beverages and flavored sparkling waters, but Frohman says his versions’ functionality give them an edge over standard go-to drinks. “Regular sparkling beverages are refreshing, but people are really looking for products that will benefit their health in some way,” he explains. “Hardly anyone is making beverages like this. A lot of companies will say they have mushrooms in their sparkling drink, but there’s not actually much mushroom in them, whereas we are a high-potency mushroom product.” Frohman’s great-tasting-yet-still functional sparkling beverages also enhance creativity and productivity. “When you drink these drinks, the sky looks bluer, and the trees look greener. Whatever you're doing, you feel more present, more euphoric, more elevated,” he adds.

The success of his company has only served to solidify Frohman’s belief in the power of mushrooms. “They’ve been utilized for a really long time, especially in Asia, but they exploded over the last decade—not because of celebrity endorsements or anything like that but because regular people learned about the benefits of mushrooms through word of mouth,” he says. “Now we're at this inflection point, and we’re about to see that this market is way bigger than most people realize.”

With new technological developments and experimentation, companies like Frohman’s are now able to seamlessly add mushrooms into tasty treats people drink and eat on a regular basis, and Frohman hopes Odyssey Elixir beverages will continue to lead the way. He is currently testing out additional types of 'shrooms, such as turkey tail and reishi, and developing new flavored sparkling drinks as well as a low-calorie coffee beverage. No matter what comes next, it is sure to be 'shroom-specific because Frohman continues to believe so strongly in the benefits of these ancient remedies. “Functional mushrooms are not a band-aid,” he says. “They are a real cure that is going to be with people for the rest of their lives to really make a difference.”