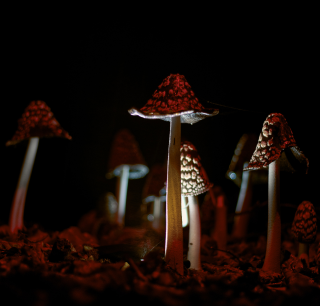 This week in news that sounds straight out of a science fiction book, novel research from the University of the West of England’s Unconventional Computing Laboratory in Bristol found that certain mushrooms have a rich vocabulary.

In case it's not obvious, mushrooms aren’t likely to be using this lil' language to discuss today's hot-button human issues. Instead, researchers believe they’re sending electrical signals to communicate with themselves, other mushrooms, and surrounding organisms about food sources, imminent danger, and the like. (Okay, so maybe they are speaking somewhat like homo sapiens, but here’s hoping they’re less prone to conspiracy theories.)

For the study, Professor Andrew Adamatzky sought to uncover any similarity in patterns between mushroom speak and human speak. To do so, he analyzed the electrical signals of enoki, split gill, ghost, and caterpillar mushrooms by placing microelectrodes into dirt colonized by the fungi’s mycelia.

Adamatzky’s team observed spikes in this electrical activity, which is not a phenomenon unique to mushrooms, but they also found unique patterns to these spikes which could be interpreted as a form of communication. Specifically, mushroom participants demonstrated electrical spikes clustered in 50 distinct trains of activity that mimicked a vocabulary of sorts, and the distribution of “fungal word lengths” appeared to mimic that of human language.  "We recorded extracellular electrical activity of four species of fungi,” Adamatzky writes in the study. “We found evidence of the spike trains propagating along the mycelium network. We speculated that fungal electrical activity is a manifestation of the information communicated between distant parts of the fungal colonies."

Unfortunately, Adamatzky has no idea what these 'shrooms are saying to one another, and some scientists are skeptical of his interpretation of these electrical spikes as a form of communication. Still, he is optimistic about the potential of further research. "We should not expect quick results: we are yet to decipher language of cats and dogs despite living with them for centuries, and research into electrical communication of fungi is in its pure infant stage," Adamatsky writes in the study.

For now, this fantastical finding is not a bad dinner table topic if you find yourself otherwise at a loss for words. Just don't be surprised if the more sensitive among your dining companions suddenly loses their appetite for champignons when you point to the white button mushroom in your pasta dish and say something awkward like, “You know, it’s possible that these mushrooms were having a spirited political conversation right before they were harvested."