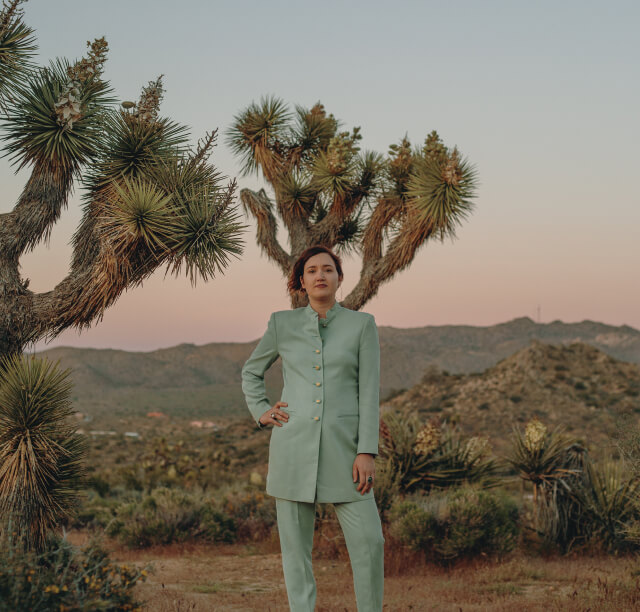 The veteran journalist shares her thoughts on the emerging industry's promise (and potential pitfalls).

Shelby Hartman is cofounder and CEO of the psychedelics-centric biannual print magazine and media company DoubleBlind. As a journalist, she has covered cannabis, psychedelics, and other topics for VICE, Playboy, Quartz, LA Weekly, the Huffington Post, Thrillist, and Rolling Stone. She sat down with us to discuss the immense promise of the modern psychedelic movement, as well as its potentially tricky future.

SHROOMBOOM: Why do you think people are so drawn to psychedelics?

Some people are doing them to explore their own consciousness; some are doing them out of curiosity; some are doing them to let loose on the dance floor. Some are [military] veterans, going to the Amazon and doing ayahuasca for their post-traumatic stress disorder because they've been failed by the VA. Moms that recently gave birth and are still breastfeeding are turning to microdosing for their postpartum depression. (Disclaimer: There's no evidence that it works, but there are women out there doing it.) We published a story by a journalist named Abbie Rosner about how baby boomers—many of whom haven't tripped since the 60s or 70s, when they did so recreationally— are now turning to psychedelics with intentionality because they want to come to terms with the fact that they're getting older. There’s an infinite number of reasons.

What inspired you to create DoubleBlind?

We wanted people to understand the nuanced conversations happening within the field of psychedelics at this pivotal moment to ensure that the industry unfolds in a way that is equitable and accessible, that the indigenous stewards are being respected and honored for the fact that they have preserved knowledge around these medicines for millennia, and that people aren't shut out of opportunities in the industry because they don't have regulatory savvy or tons of capital from the get go. That's the first North Star [for DoubleBlind]—it's more about getting people to become aware of what's happening within the psychedelic field.

The second component is around education and harm reduction, and that's where our courses and webinars come into play. My cofounder, Madison Margolin, and I are aware that millions of people are suffering and are becoming curious about psychedelics in large part due to what we call the “Pollan effect,” which is what happened after Michael Pollan's book on psychedelics, How to Change Your Mind, became a New York Times bestseller. All these people who had no idea what was happening in the realm of psychedelics suddenly wanted to try them, but they had limited resources to figure out how to do so safely (or if they should try them at all).

We see in FDA-approved clinical trials, and simply in the anecdotal evidence going back thousands of years, that psychedelics hold incredible potential to disrupt our mental health epidemic. Simultaneously, we also know that they are not a panacea; they are not for everybody, and they don't work very well if you don't do what we call 'the work' of integrating the revelations and the realizations you have during these experiences. We're not here to say, “Rah, rah psychedelics; everyone should use them all the time, every day, for every problem, and they're going to change the world.” We're here to take a rigorous approach to psychedelic education and to help people make responsible decisions as to whether this is an experience they should have, and if so, how they can do it responsibly.

What do you think mainstream media gets wrong in its coverage of psychedelics?

Actually, the mainstream media has done a much better job of covering psychedelics since we launched DoubleBlind; there's been some really great reporting around psychedelics in a number of publications. Shayla Love at Vice has done some amazing reporting on psychedelics and what's happening in the realm of drug development. The Washington Post recently did an amazing story on the lack of racial inclusion within the psychedelics industry and efforts that are being made to change that.

[With that said], I hope to see more discussions on issues pertaining to equity and access and what psychedelic medicine is actually going to look like when it gets to market. I also think we see a lot of parallels being made in the media between the cannabis industry and the psychedelics industry, and while there are some similarities, it's important for people to understand that cannabis and classic hallucinogens, like LSD and mushrooms, are very different. Firstly, cannabis, at least from what we can tell, is primarily treating symptoms. If you're a veteran who has post-traumatic stress disorder, you might take an edible every night before bed to help you sleep, but it's not going to actually rewire the way your amygdala processes fear like MDMA might. Additionally, just by virtue of what psychedelic experiences are like on high doses, it's likely they’re going to be regulated very differently than cannabis.

Increasing access to psychedelics could be hugely beneficial given their mental health benefits but to your point, increased access is a complex proposition. What challenges do you think the budding industry will face as it expands in coming years?

There are also challenges around creating an above-ground regulatory system that deems what is and isn't a legitimate context for doing psychedelics. On the one hand, we want to ensure there's a way for people to know who is and isn't a safe facilitator. On the other hand—we did a story about this in the last issue of DoubleBlind called “The Advantages of Prohibition.” There was a study conducted among some underground psilocybin practitioners in Colorado who basically said, “We all practice in different ways—some like to incorporate massage; some like to incorporate breathwork; some like to combine mushrooms with other psychedelics.” If we're just looking to the FDA to regulate everyone, a lot of people are going to get shut out. What happens if someone wants to do psilocybin, but they don't have major depressive disorder or treatment-resistant depression? Maybe they'll still qualify [for a prescription] through something called off-label [use], but then insurance might not cover it.

Also, not everybody is going to want to do psychedelics in an FDA-approved clinical setting. Some people want to do psychedelics in the desert with their friends, by themselves in their bedroom, or at a ceremony. We often say at Doubleblind that we're not trying to create a hierarchy of set and setting. As long as people are being respectful of one another, of the lineages of these medicines, and they're not harming themselves or each other, we're all for it. That's one of the biggest challenges we're going to face as we think about how to scale the psychedelics industry in order to ensure safety, efficacy, and accessibility without delegitimizing certain ways of doing psychedelics or certain types of knowledge around doing them.