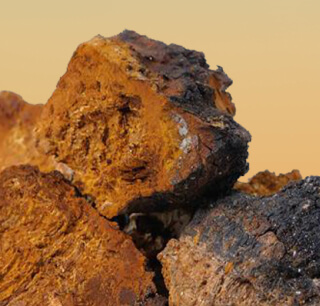 This "black gold" may not be psychoactive, but it's still magic.

Once upon a time, the strangest ingredient you’d find served at a coffee shop was whatever sugary syrup Starbucks had most recently concocted. These days, however, baristas everywhere suddenly seem to be pushing the same substance: chaga. People line up in droves at LA-based coffee shop Alfred, for example, to sample the bean-slinger's trendsetting chaggacino. But if the ingredient’s meteoric rise to ubiquity seems to have come out of nowhere and you still have no idea WTF chaga actually is, you’re likely not alone. Keep reading to find out more about the mysterious mushroom spreading its spores to coffee cups worldwide.

What Are Chaga Mushrooms?

Inonotus obliquus might sound like a Harry Potter spell, but it’s actually the scientific name of the fungus more commonly known as chaga. This “mushroom” from the Hymenochaetaceae family, which is found in the northern hemisphere, is not technically a mushroom at all but rather a hard, irregularly shaped parasitic fungus that looks like burnt coal on the outside with a soft orange core (hence its nickname “black gold”). As inonotus obliquus slowly causes the live birch trees it infects to decay, chaga forms on their trunks. And though its appearance signifies death for our forest friends, chaga is a medicinal marvel for humans that has long been utilized in various cultures and is currently gaining popularity in wellness circles worldwide.

Chaga boasts a surprising range of health benefits. Traditionally, it’s been used to treat tummy troubles, among other issues, and modern science shows the efficacy of this remedy could be due to chaga’s potential antiviral and antiparasitic properties as well as its high antioxidant content, which can decrease inflammation in the gut.

Today, chaga is most widely touted for its ability to support the immune system. This benefit is partially attributed to the shroom’s anti-inflammatory properties, but chaga has also been shown to regulate the production of cytokines, which help cells communicate with each other to fend off illness.

This super 'shroom is believed to help fight specific diseases, too. Antioxidants and other beneficial compounds in chaga may reduce bad cholesterol, thereby protecting against cardiovascular disease. The fungus is also believed to potentially prevent and slow cancer by blocking cell damage caused by free radicals. Chaga has shown promise as an anti-diabetic agent, too, as it can help to regulate blood sugar levels and improve insulin resistance. It may be neuroprotective as well. And while no fountain of youth exists outside of whatever it is that Paul Rudd has been taking for the last 30 years, chaga may help prevent cellular aging.

In short, this fungus should probably be among us as much as possible, as it is essentially a superfood on steroids. "Chaga is the most profoundly impactful and powerful antioxidant and immune supportive organism there is," says Earth & Star cofounder Erica Huss. "In terms of antioxidant content, it blows all the typical foods we think of when we think of antioxidants, like pomegranates and goji berries, out of the water."

How to Use Chaga Mushrooms

You won’t find chaga mixed into a stir fry or subbing in for carne asada like some other 'shrooms. Instead, it’s typically grated into a fine powder for consumption. This powder has been brewed as a tea in parts of the world such as Eastern Europe for centuries, but it’s now commonly mixed into coffee and coffee-like drinks, such as the aforementioned chaggacino. It can also be brewed into a broth to serve as a soup base or added into batter or dough when making cakes and other baked goods.

In recent years, as immunity and overall health have become increasingly top of mind for many folks, chaga’s benefits have also made it a star ingredient in a range of wellness products. Whether you want to sip your chaga, take it in tincture or capsule form, or go with a gummy, there’s a chaga supplement for you. Keep reading to shop six of our favorite products that prove this 'shroom slaps.

6 Products That Will Help You Reap the Benefits Of Chaga 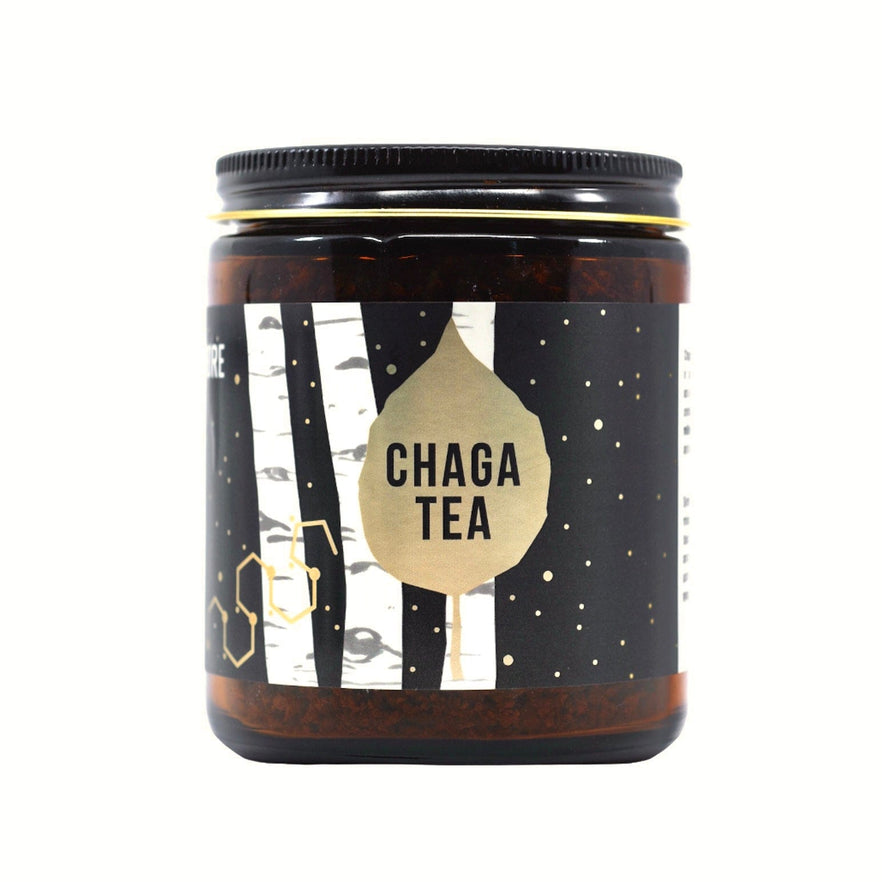 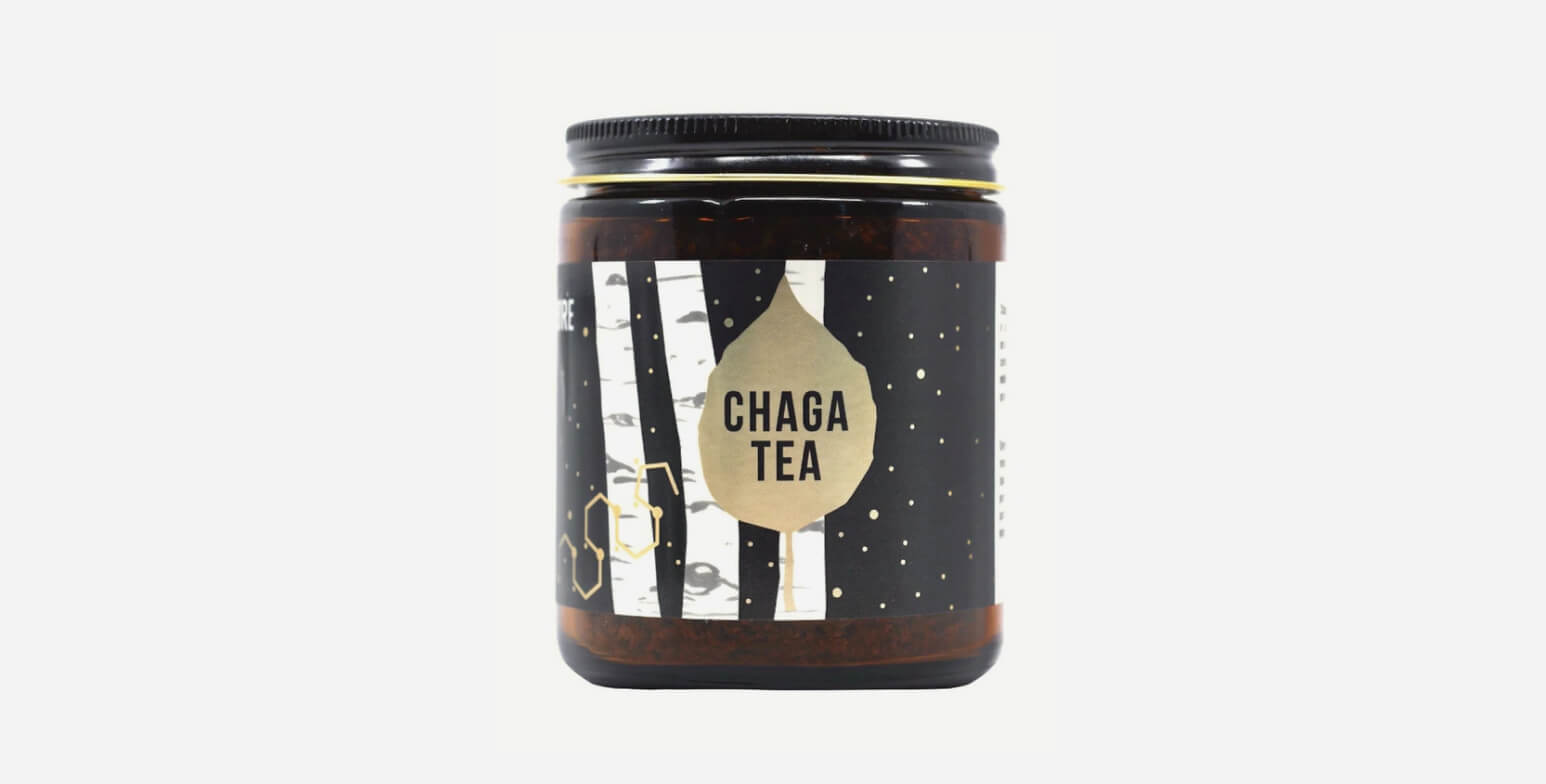 To make this product, North Spore takes chaga cultivated in Maine, breaks it down into chunks, and air dries it before it is ground into a powder. The resultant tea may not make you immortal, but it will give your immune system and overall health a boost that could hypothetically add a few years to your life. To release its medicinal properties into your cup daily, just add water. 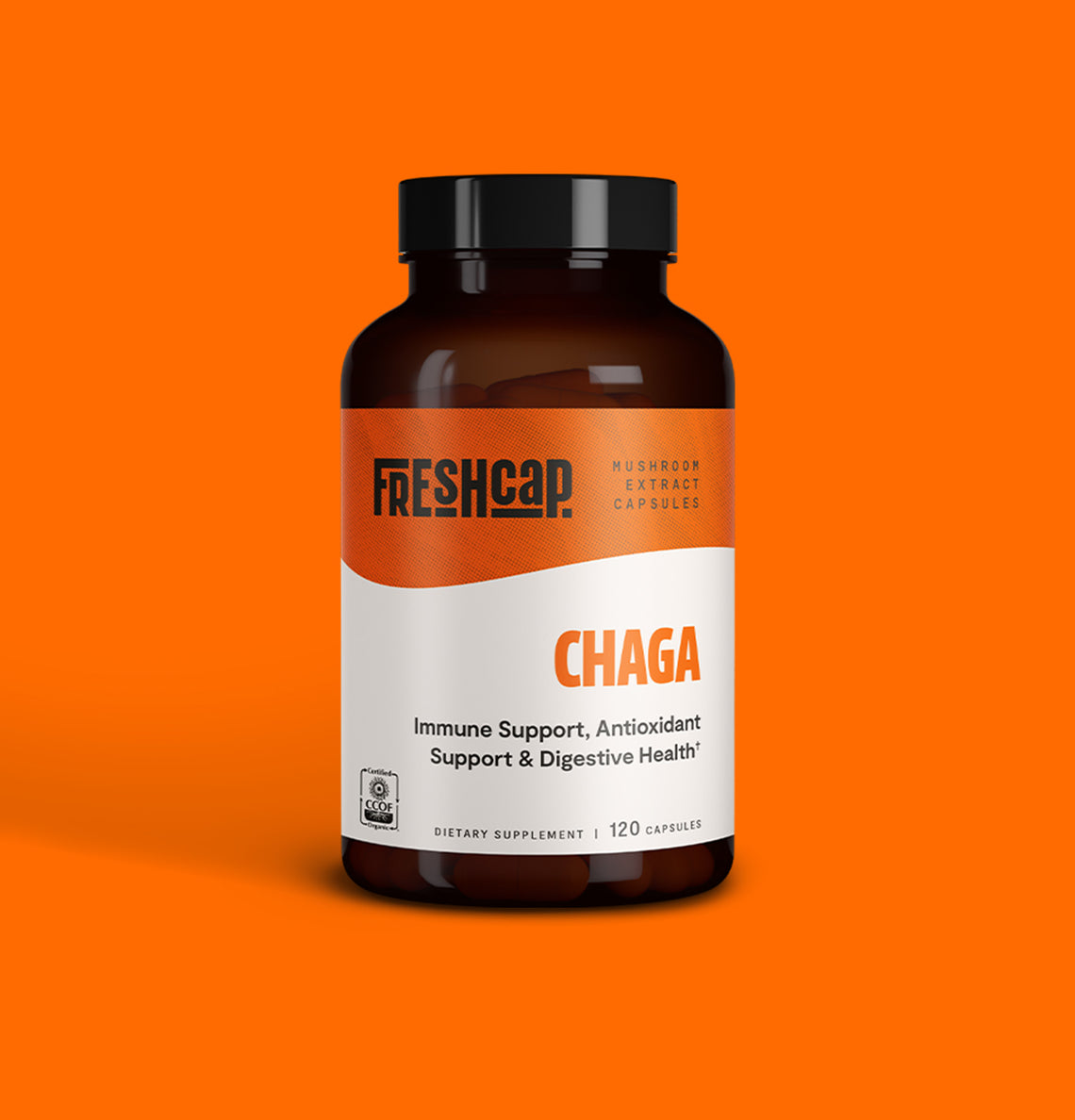 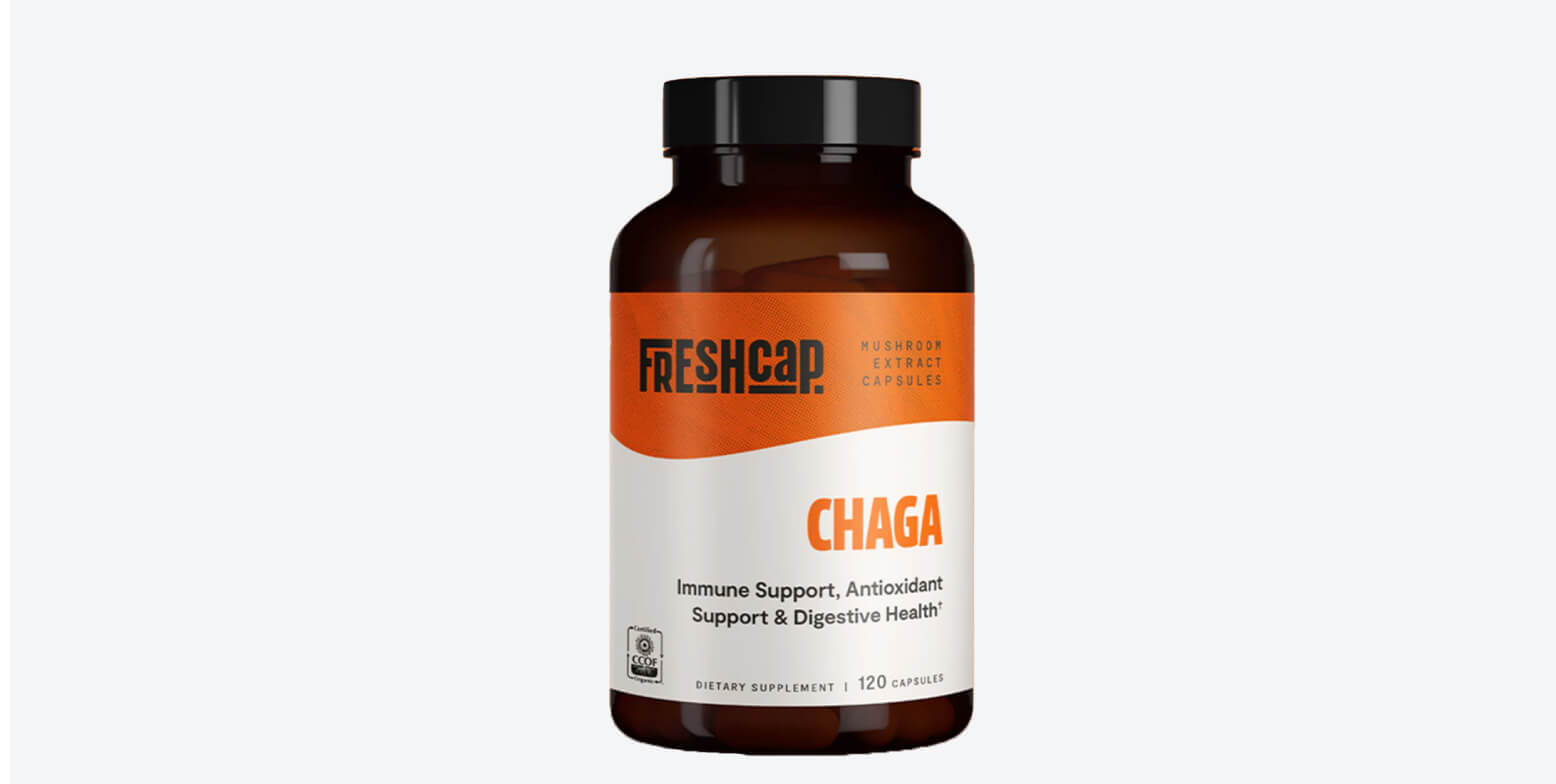 If capsules are more your cup of tea than, well, tea, these supplements from Fresh Cap, the “king of medicinal mushrooms,” may be your best bet for a chaga-powered well-being boost. They’re made from a dual-extracted chaga powder purported to protect your cells and immune system. 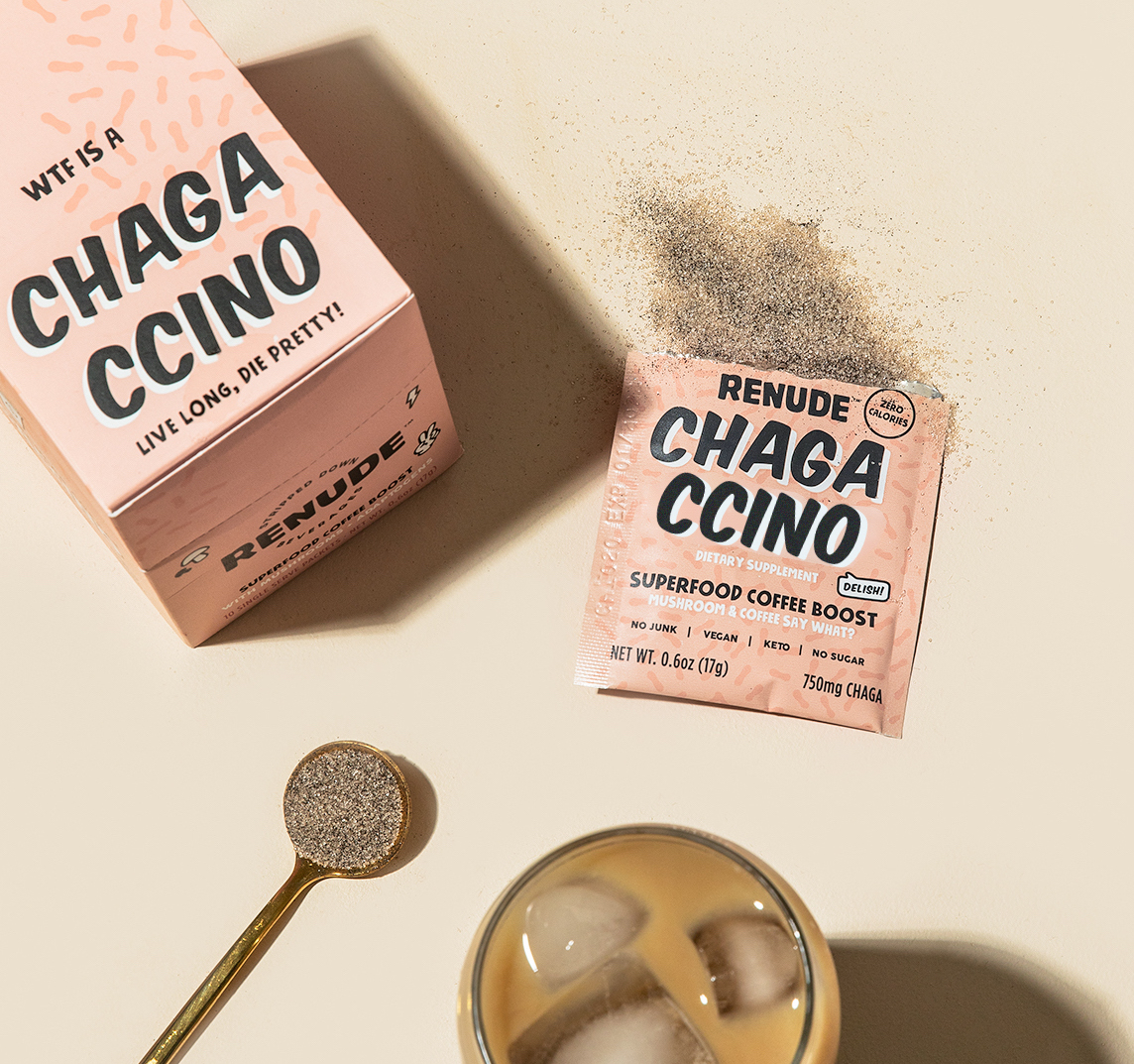 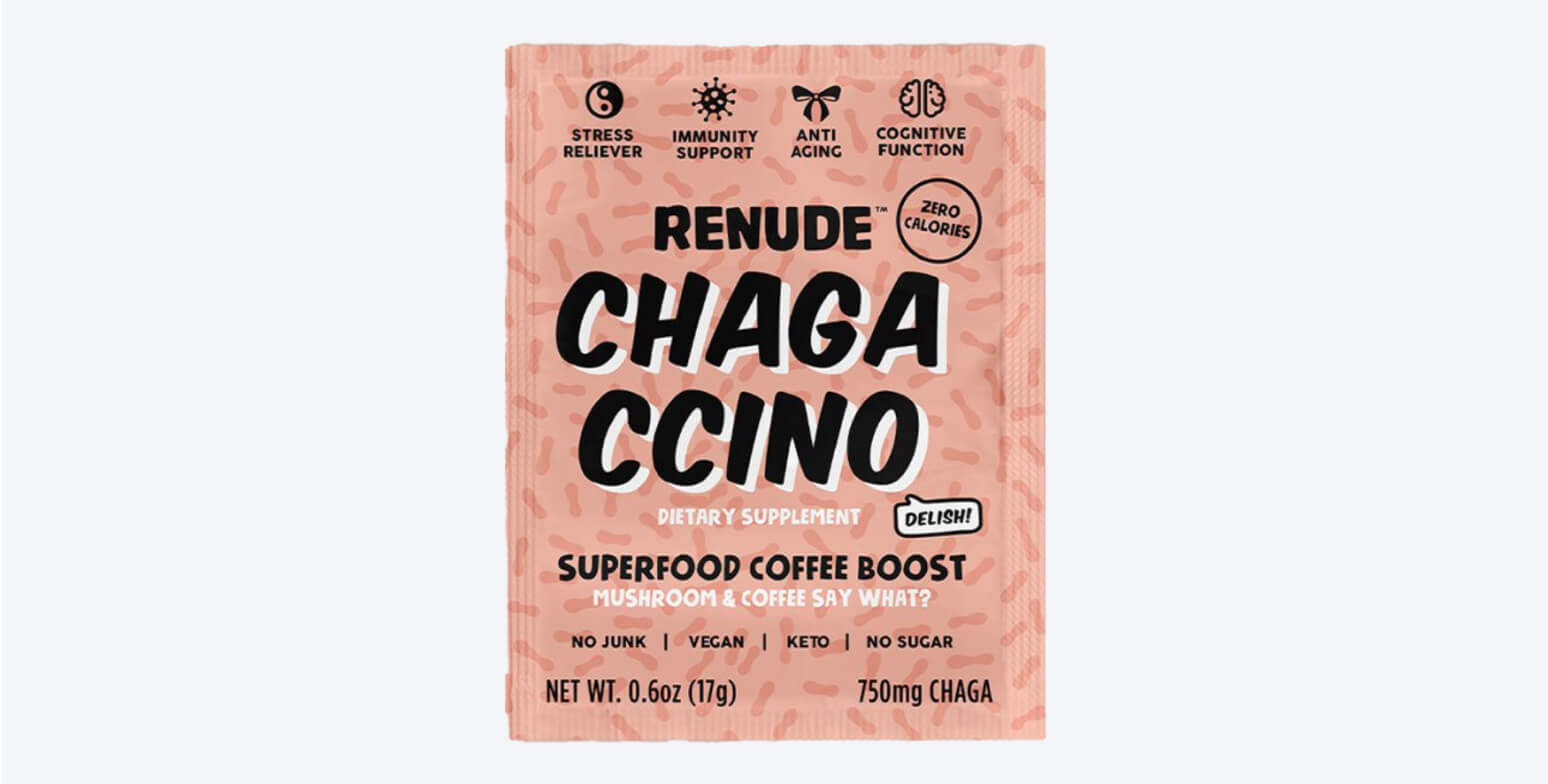 If you can’t make it to LA's trendy chagaccino-slinging Alfred coffee, simply mix this little supplement packet into your next homemade latte for a DIY dupe. Renude’s Chagaccino blend is a sugar-free, keto-friendly vegan latte chock full of wild-foraged chaga and other adaptogens to support immunity, promote anti-aging, and boost energy sans jitters. 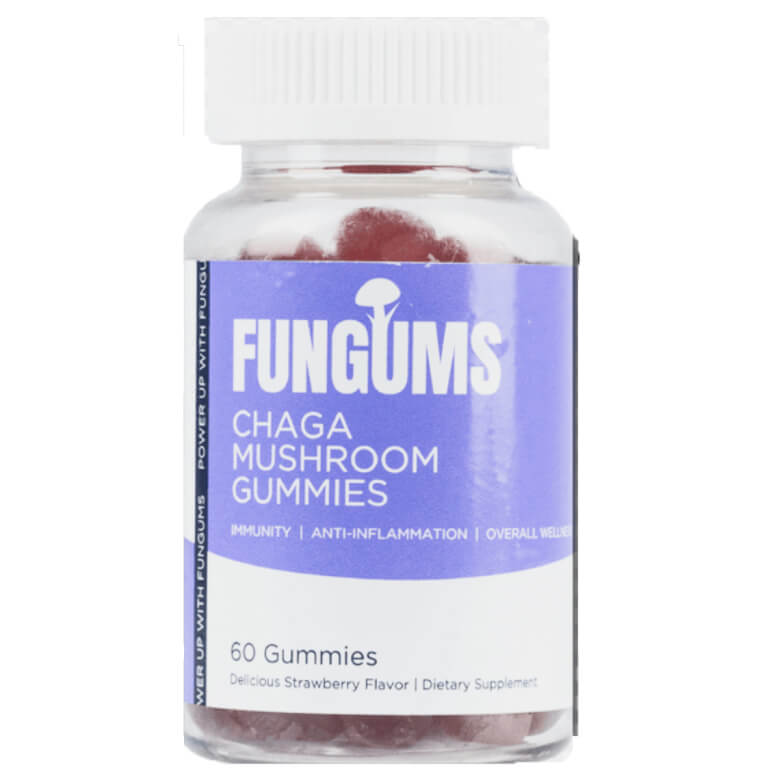 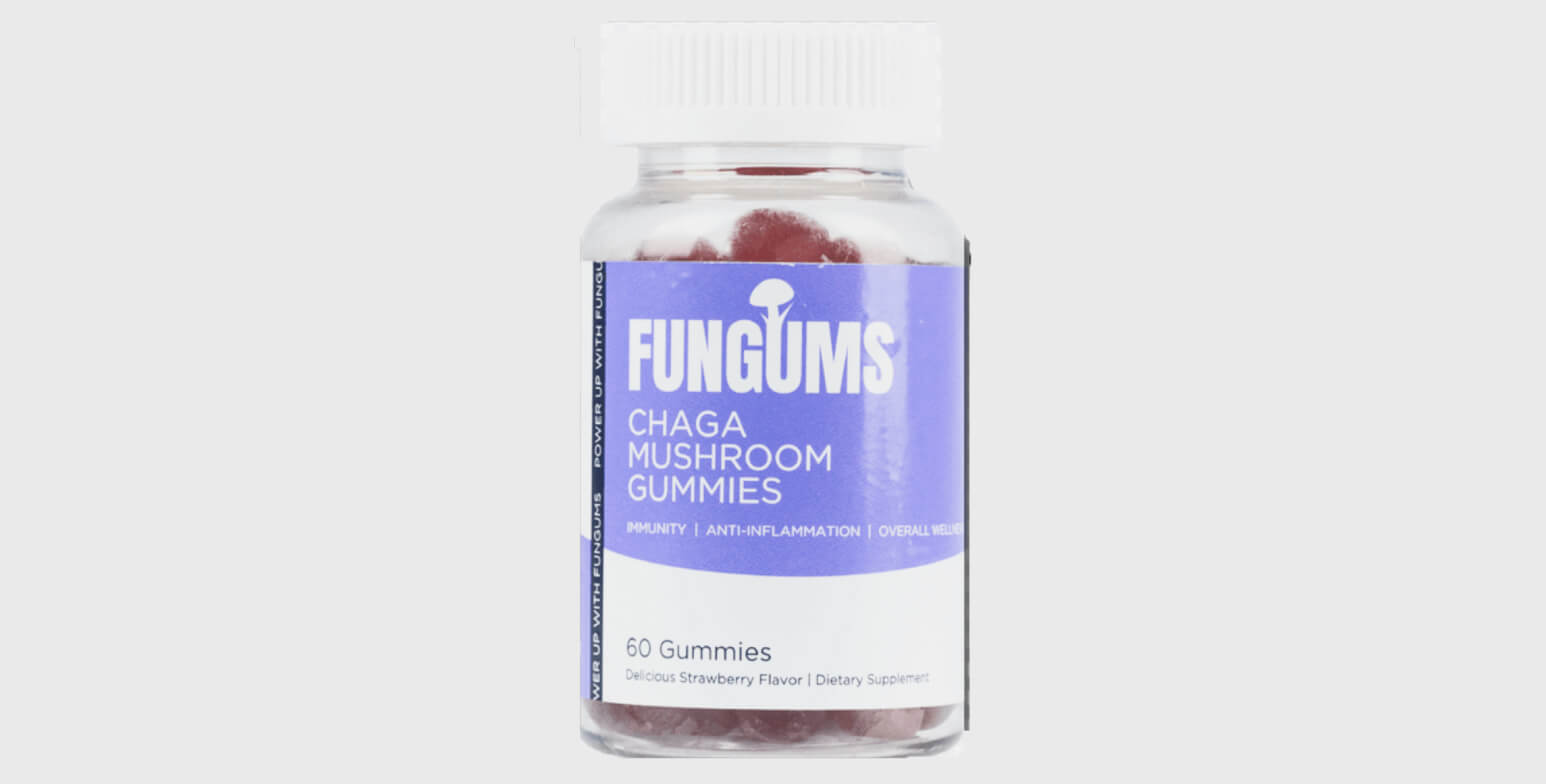 These strawberry-flavored gummies transform parasitic fungi into a crave-worthy treat. The 500mg dual-extracted 8:1 extract supplement is anti-inflammatory and boosts immunity in one berry bite. 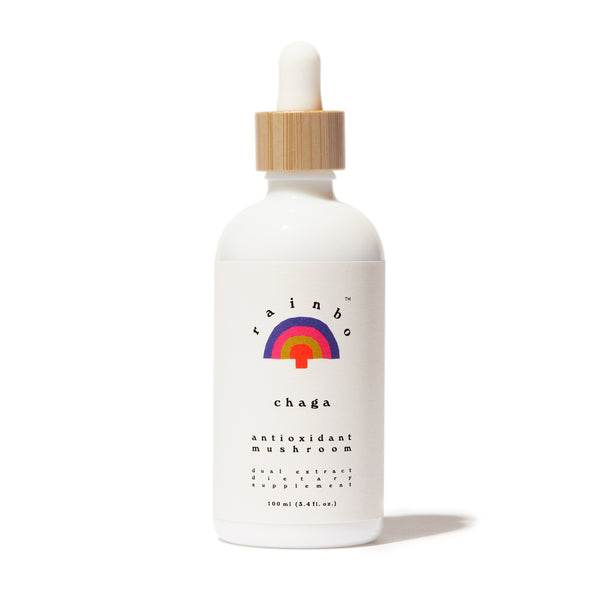 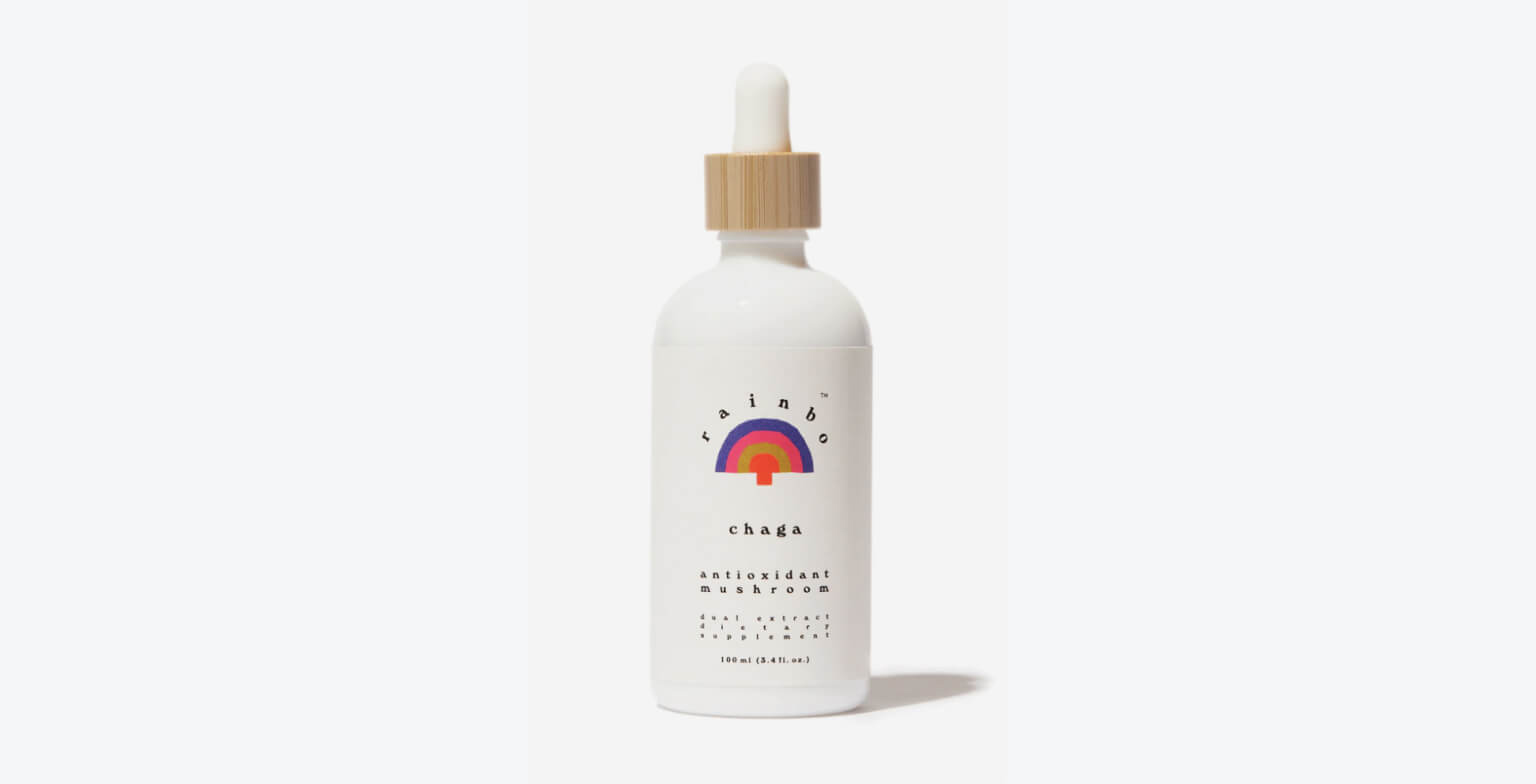 Made from mushrooms sustainably cultivated in Canada, this tincture is said to super-chaga your immune system. The extract is safe to be taken daily and boasts antioxidant properties that restore oxidative balance in the body—and it may even slow cellular aging! 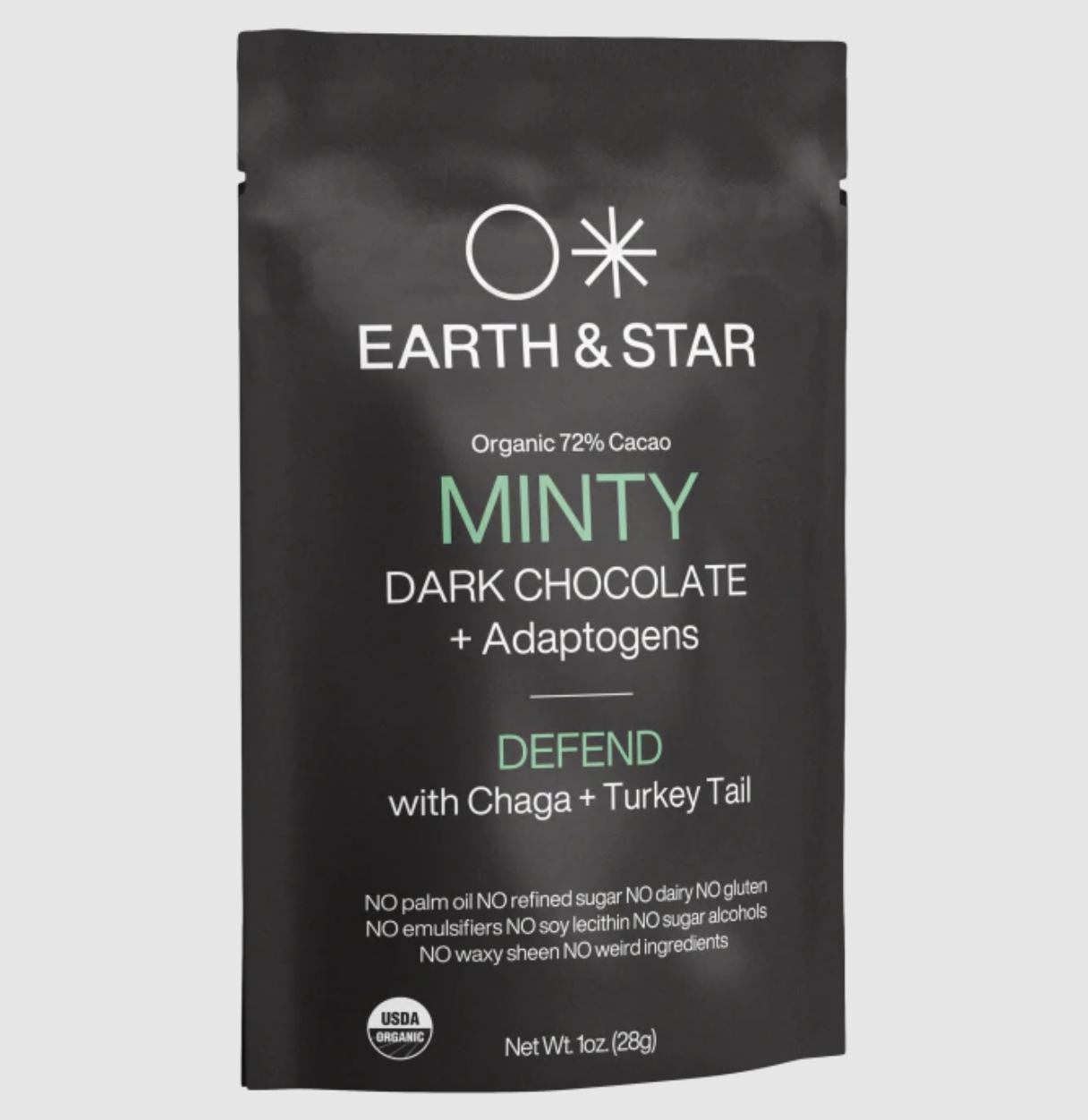 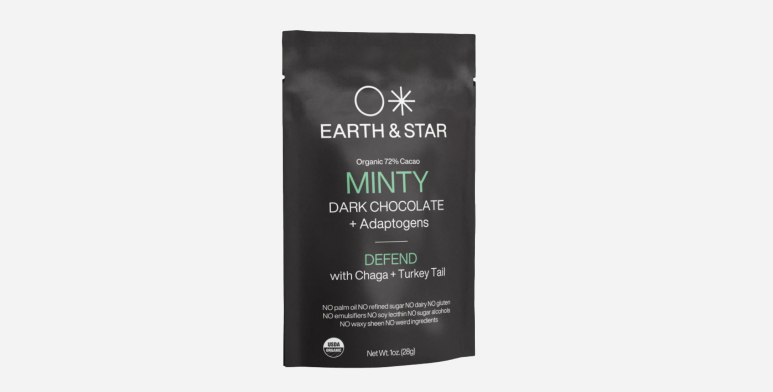 It would be a lot easier to remember to take supplements if they all came in chocolate form, like this dark bar packed with the fruiting bodies of both chaga and turkey tail mushrooms. It's been specifically formulated to boost immunity, making Vitamin C-packed oranges look like cod liver in comparison.