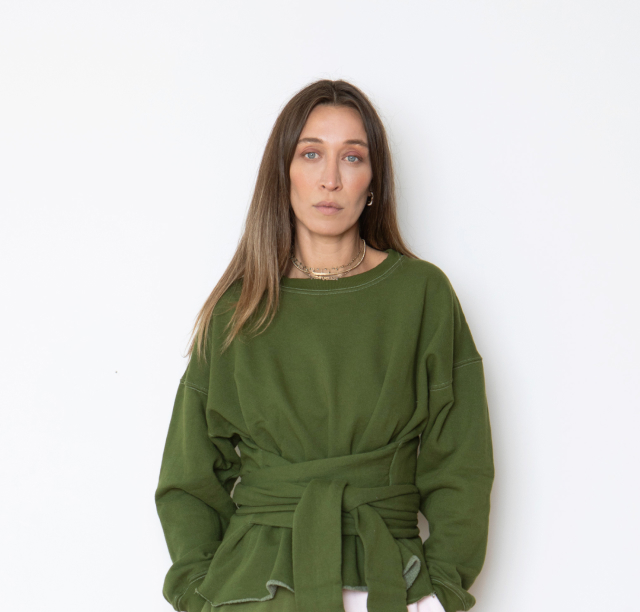 "Mushrooms are going to change the face of mental health."

Alana Hadid's very famous family is not shy about sharing their struggles with mental health issues. The entrepreneur’s supermodel sisters, Gigi and Bella, have both been open about their experiences with anxiety and depression, and Alana herself is currently partnering with the mental health platform Cerebral to help promote accessible mental health care. This advocacy is what's driving her excitement around magic mushrooms at present as their potential to treat anxiety, depression, PTSD, addiction, and more becomes increasingly evident.

While Hadid is more likely to read about the benefits of psilocybin than to regularly ingest it at hallucinogenic doses, she has taken recreational trips in the past. These experiences, she says, were “by and large beautiful,” mostly because, as she explains, they opened her mind. “You walk around seeing the beauty in the world, and even if a mushroom is facilitating that, it’s in you," she says. "Your brain just has to be allowed to open."

“I’ve always been interested in plant-based medicine, and I’ve been researching psilocybin’s benefits for a long time,” Hadid says. “I’ve learned so much about how it can be used to treat mental health issues.”

Her own experiences have been unsupervised, but Hadid tells me she has friends whose lives were changed after taking guided trips. “Many of these people had clinical depression, were suicidal at some point, or had drug or alcohol dependencies, and they have felt a massive amount of relief from doing these trips,” she says. To extend the perceived benefits of these psychedelic experiences, several of Hadid’s friends regularly practice microdosing psilocybin, and she herself has a microdosing regimen. Typically, she will spend one month microdosing every other day and then take the next month off from microdosing entirely. During each approximately 30-day period, she journals to note differences in her mood and cognition.

Through this process, Hadid’s realized that she’s better able to handle life’s challenges while microdosing. “I don’t immediately feel an effect, but in retrospect, I look back on my day and see that I was so much calmer, so much more focused,” she says. “I see a difference in the openness of my mind and my ability to access my emotional side without experiencing any of the trauma [behind the emotions]. I'm better able to access my creativity, too.” Hadid shares these experiences not to be sensational but because she hopes to help destigmatize psilocybin use so that a greater number of people can benefit from it therapeutically. “I really think mushrooms are going to change the face of mental health,” she says.

“I see a difference in the openness of my mind and my ability to access my emotional side without experiencing any of the trauma [behind the emotions].”

This isn’t the only realm in which she views mushrooms as potentially transformative; Hadid notes the use of adaptogenic mushrooms as functional medicine and says that she currently drinks MUD\WTR, the mushroom-based coffee replacement, as well as Kin Euphorics, her sister Bella’s brand of mood-and-cognition-enhancing mushroom-infused beverages. “I've noticed a difference in drinking Kin during the day and at night,” she says. “It turns you on in a way that doesn't require a ridiculous amount of caffeine.”

Hadid also recently realized that her favorite skincare products just so happen to contain mushrooms, something she considers to be a happy accident and a feature of fungi's effectiveness in the beauty and skincare realm as well. Her go-to product is Moon Juice’s Acid Potion, a liquid exfoliator that contains reishi mushrooms.

The entrepreneur is carefully following developments in mushroom-enabled sustainability efforts, too. Specifically, she has her eye on mycelium leathers and is eager for them to become accessible to small, independent labels, including La Detresse, the ready-to-wear line of cozy sweatpants, pullovers, and cool-girl clothing she cofounded that has coincidentally veered toward trippy vibes since its very first collection. At first, Hadid explains, certain aesthetic choices simply lent themselves to psychedelic references—her first collection was called “Acid Drop” due to the fact that it used a lot of acid washes—but in recent years La Detresse’s designs have been more intentionally developed in that direction. “Our latest collections have been inspired by the trip everyone's taken inside themselves over the last two years as well as the things you can do to go on a metaphysical trip, like mushrooms,” Hadid says. This design inspo is especially evident in the line’s Spring/Summer 2022 collection, as Hadid’s taken the subtle and made it overt with key designs featuring mushroom graphics.

These pieces serve, perhaps, as an official outing of Hadid as a fungi fanatic, and this is no accident given how eager she is to share her enthusiasm for their healing powers. "Many people think mushroom-based medicine is sort of a newfangled L.A. fad or woo-woo trend, but mushrooms have been a part of humanity’s journey throughout history," she says. "Fungi have been a big part of the medical revolution, and they will be a big part of the mental health revolution, too. There's just so much that mushrooms can do."