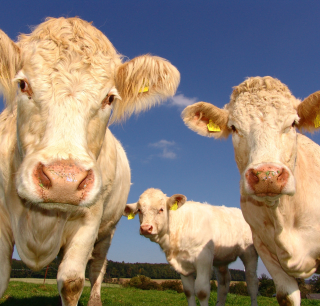 Researchers recommend spreading their spores to help save the planet.

With everything going on in the world right now (insert exploding head emoji), you’d be forgiven for having missed the latest report from the United Nations’ Intergovernmental Panel on Climate Change (IPCC); however, the data it presents is worth your attention. Essentially, worst-case-scenario climate outcomes are already occurring, and they’re happening more quickly than expected. Myriad factors are contributing to this crisis, but it’s no secret that meat production is among them. Science shows that animal agriculture creates between 14.5 to 16.5 percent of global greenhouse gas emissions and causes 80 percent of global deforestation. While legislative and corporate action will be necessary to address this issue, researchers believe an unlikely hero could step in to help solve the problem: blue milk cap mushrooms.

These aesthetically dazzling mushrooms, native to regions such as North and Central America, China, and Japan, show promise as a low-impact alternative to animal protein. While the meat industry requires planet-threatening deforestation to create large plots of land for grazing the livestock that account for much of the protein in the global diet, these protein-packed (and essential fatty acid-rich) shrooms actually require that trees not be chopped down as they have a symbiotic, or ectomycorrhizal, relationship with the climate-critical plants; the two rely upon each other to thrive. This means that rather than adding to the problem of greenhouse gas emissions, blue milk cap cultivation would actually help to draw carbon out of the atmosphere by requiring the preservation and planting of trees.

Unlike other protein-rich crops, additional water, fertilizer, and sustenance for the mushrooms would not be required in their cultivation and, according to scientists from the University of Stirling in the U.K., blue milk cap crops are efficient AF. “Combing data from the emerging field of [ectomycorrhizal fungi] cultivation with nutritional studies, we show that a protein production of 7.31 kg per hectare [2.47 acres] should be possible,” the study authors write. In comparison, beef production yields between 4.76 to 6.99 kg of protein per hectare per year.

Of course, blue milk caps don’t exactly taste like beef. (If only!) While the mushrooms are customary—if not exactly Michelin-starred—fare in Guatemala, Mexico, and China, most people will likely need some convincing to swap steak for these shrooms. Which isn’t to say they taste bad; according to Aaron and Susan von Frank of Tyrant Farms, their flavor tends to vary but can be described as, “mild, sweet, and nutty with a hint of cracked pepper on the finish.” The von Franks like to fry them but pickling blue milk caps is your best bet if you want to preserve their unique color.

At present, these vibrant shrooms may be a bit hard to find if you don’t live in an area to which they’re native and in season, though some spawn are sold through Etsy. To enable greater access, those aforementioned researchers describe in their paper a method for intentionally cultivating blue milk caps by inoculating the roots of tree saplings with the fungus and then planting them in agreeable climates throughout the world. The resultant mushrooms could then be eaten fresh or processed, and the protein can even be extracted and added into other foods.

Time will tell whether or not these little blue shrooms are able to spread their spores around the world, saving trees and preserving the health of the planet in the process. In the meantime, keep a lookout for Lactarius indigo in the wild, and if you happen upon one on a hike and are in need of an energy boost, feel free to ditch your (environmentally-destructive, and not-so-kind-to-cows) jerky on its brilliant blue behalf.