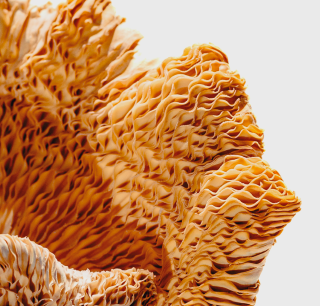 What we know about fungi is freaking fantastical, and our intel is still in its infancy.

“Fungi are everywhere but they are easy to miss. They are inside you and around you. They sustain you and all that you depend on. As you read these words, fungi are changing the way that life happens, as they have done for more than a billion years. Fungi provide a key to understanding the planet on which we live, and the ways we think, feel and behave.”

These words, written by biologist and Entangled Life author Merlin Sheldrake, PhD, are not just beautifully crafted hyperbole. Though they’re often underestimated, fungi are truly a critical component of Earth’s infrastructure, and they impact every being on this planet. They’ve existed for approximately a billion years and have seen it all, including humanity’s humble beginnings. And not to get too dark or existential, but they’ll likely bear witness to our eventual demise, too. Fungi are ancient, wise, and oh-so-deserving of our respect.

Still, many of us know relatively little about mushrooms and their mycelium beyond that some are tasty, some are *magic*, and some will make your feet itch like crazy (gross but true!). In fact, the greatest takeaway from Dr. Sheldrake’s writing is that the more you learn about these fantastic beings, the more you realize just how little you actually know about them. Case in point: These nine facts from his research will absolutely blow your mind.

1. A fungus can be humongous

The largest organism on Earth, period, is a type of honey fungus (Armillaria ostoyae) located in the Blue Mountains of Oregon. It weighs hundreds of tons and sprawls out across 10 square kilometers. She’s an old gal, too. Researchers estimate that this humongous fungus is somewhere between 2,000 and 8,000-years young.

More than 90 percent of the plant kingdom relies on mycorrhizal fungi—a.k.a. fungal roots with which plant roots form a symbiotic relationship—to create shared networks for communication, nutrition, and survival. This system is cheekily referred to as the “wood wide web.” Cute.

Someone has to pitch the first tent, and you can count on lichen—a union between fungi and algae—to volunteer. Lichen are the first to colonize newborn ecosystems, like freshly-cooled volcanic islands. This means they lay the groundwork for the rest of life to follow.

4. They can break down some of the most stubborn substances on Earth, including pollutants

The enzymes and acids that exist in fungi have the power to break down rock, TNT, polyurethane plastics, and lignin (the hardest component of wood). Fungi can also munch on crude oil from oil spills (this is called mycoremediation) and are capable of filtering heavy metal and toxins from bodies of water. All this means fungi can be harnessed to help save the planet from man-made pollution.

5. Mushrooms are responsible for many of the miracles of modern medicine

In 1928, Alexander Fleming accidentally discovered a bacteria-killing mold called penicillin. This discovery led to the development of the first mass-produced antibiotics, which went on to save innumerable lives. Prior to penicillin, people died from even minor bacterial infections caused by otherwise non-life-threatening injuries, such as small cuts and scratches. According to Dr. Sheldrake, its invention may have even shifted the balance of power during World War II because the U.S. was uniquely capable of deploying the life-saving medication to treat American troops.

The medicinal value of mushrooms doesn't stop at penicillin, either. “Fungi are pharmaceutically prolific, and today we depend on them for many other chemicals besides penicillin: cyclosporine (an immunosuppressant drug that makes organ transplant possible), cholesterol-lowering statins, a host of powerful antiviral and anticancer compounds (including the multibillion-dollar drug Taxol, originally extracted from the fungi that live within yew trees), not to mention alcohol (fermented by a yeast) and psilocybin (the active component in psychedelic mushrooms recently shown in clinical trials to be capable of lifting severe depression and anxiety),” writes Dr. Sheldrake.

6. And humans have probably been using this mushroom medicine since before they were humans

Researchers who have reconstructed the eating patterns of Neanderthals—our predecessors who went extinct 50,000 years ago—found evidence that one ancient pre-human had been eating a penicillin-producing mold. Since this particular subject also had a dental abscess, researchers hypothesize that folks back then may have had knowledge of the antibiotic properties of this particular mushroom.

7. Fungi are truly among us

Fun(gi) fact: Mushrooms are more closely related to animals than they are to plants. This is part of the reason we benefit pharmacologically from so many of their biochemical innovations or defense mechanisms against disease and injury. “When we use drugs produced by fungi, we are often borrowing a fungal solution and rehousing it within our own bodies,” Sheldrake writes.

8. Of course, relations with these distant relatives aren’t always good

As anyone who’s ever had jock itch, a yeast infection, or athlete’s foot knows, fungi aren’t always our friends. In addition to irritating ailments, they can also cause serious disease. And they’ve been known to decimate our food supply, too. In fact, the Cavendish banana, which accounts for 99 percent of global banana shipments, is facing extinction due to fungal disease enabled by unsustainable monoculture farming practices.

9. And TBH, we barely know them

According to Dr. Sheldrake, researchers have estimated that 2.2 to 3.8 million species of fungi exist in the world. For reference, that is six to 10 times greater than the estimated number of plant species. So far, we’ve only gotten to know six percent (six percent!) of fungal species. We have a lot more to learn and so much promise and potential yet to discover.