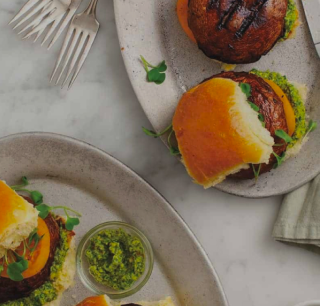 Five creative ways to add fungi to your fireworks-filled weekend.

Summer barbecue season is in full swing, and few occasions get grills going quite like the Fourth of July. Next week’s holiday is a major sizzler, and while tradition is part of what makes such events special, there’s no reason your Independence Day menu can’t evolve with the times to include more than just meat. Mushrooms offer an umami-rich substitute for vegetarians that can simultaneously serve to convert even the most committed carnivores.

'Shrooms are not only delicious but also good for the planet and for people. While each mushroom variety has a different nutritional profile, fungi are generally reliable when it comes to lowering your cholesterol, protecting your brain’s memory centers, and stimulating your gut and immune health. And by eschewing a few burgers and brats for these deliciously 'shroomy alternatives, you might just wake up on July 5th with a little less of a BBQ hangover (a.k.a. the meat sweats). So, as you stack your cart with traditional fare such as hot dogs, potato salad, and the like, consider adding 'shrooms into the mix to bring a little fun(gi) to your Fourth. Keep scrolling for five mushroom-based recipes that’ll steal the spotlight at this and any other sunny summertime barbecues this season.

Any good party host knows that the caliber of the dip selection can make or break the entire spread, and this one is a guaranteed crowd-pleaser. The recipe mixes mushrooms into cream cheese, greek yogurt, parmesan, and garlic for a warm, melt-in-your-mouth treat that’s a perfect soaking sauce for bread, crackers, and pre-cut veggies.

Burgers are a non-negotiable offering at American barbecues, but they aren’t exactly the most eco-friendly food on the planet. Make yours kinder and more conscientious by subbing 'shrooms in for beef using this inventive burger recipe from one of the internet’s most beloved vegetarian recipe writers, Jeanine Donofrio of Love & Lemons.

Tacos, on the other hand, aren’t necessarily traditional Fourth of July fare, but they’ve become so ubiquitous in the good ol’ U.S. of A. that they’ve earned a place at the picnic. This vegan take features 'shrooms smothered in honey barbecue sauce, cilantro cashew crema, and quick-pickled onions. Most of these components can be made in advance, so all you have to do on the day of is grill and go.

Mushrooms are masters of disguise, and pulled pork is one of their greatest dupes. This particular recipe for meat-free sammies comes from authorities on the subject, the authors of Veganosity's Great Vegan BBQ Without a Grill. (And yes, this means you can serve these at any summer party, whether there’s an actual barbecue present or not.)

If you’re just looking for a quick veggie side, simply grill up these baby bellas with olive oil, lemon, and fresh herbs. They’ll get nice and crispy, so you can expect a slightly crunchy, palate-pleasing char.

And since the atmosphere in this country isn’t exactly festive at the moment, you can help partygoers get more in the mood by feeding them a different type of 'shroom, too. Check out our guide to microdosing magic mushrooms in a soirée setting (with consent!) to elevate the vibes in these heavy times.