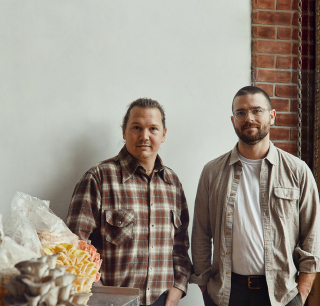 Meet Smallhold, the world's cutest and most conscientious ’shroom purveyor.

Smallhold cofounder Andrew Carter believes mushrooms are among the most sustainable items on grocery store shelves, and his goal as a commercial producer is to entice more people into eating them. “If someone is buying mushrooms, they're probably buying less of something else,” he says. “That’s really important for us as a society as our population continues to grow.”

Brooklyn-based Smallhold, which Carter cofounded with Adam DeMartino in 2017, is essentially a network of organic and local farms bringing high-quality, hard-to-find mushrooms such as yellow and blue oyster, Lion’s mane, maitake, shiitake, and royal trumpet mushrooms to consumers across the country. Specifically, the company operates macrofarms that use patented technology to produce super-clean mushrooms sold locally to consumers through grocery stores. They also operate minifarm installations, located inside trendy hotels, restaurants, and retail spaces, that double as art installations and provide mushroom provisions for the respective businesses in which they're housed. During the pandemic, Smallhold began selling at-home mushroom grow kits, too, and the company recently produced a cookbook sexy enough to be written up in Vogue as well.

Refreshingly, Smallhold’s eco claims aren’t just baseless corporate greenwashing. Generally speaking, mushrooms are a remarkably sustainable food source, and Carter says Smallhold’s production is even more environmentally friendly than most. ’Shrooms produced at the company’s macrofarms are grown on waste from the timber industry, and waste from Smallhold farms is in turn used as compost, or otherwise repurposed, by neighboring farms and businesses.

According to Carter, typical stores are stocked with a frankly sad assortment of basic ’shrooms, the sustainable nature of which is all but negated by their environmentally destructive transport and packaging. “Most grocery store shelves are filled with button mushrooms shipped from across the country, if not across the planet, wrapped in hard plastic and Styrofoam; it’s ridiculous for an environmentally friendly food,” he says. “And no one can name any of the big farms [that produce them].” Carter is hoping that Smallhold’s more eco-friendly offerings—packaged in charming trademark cartons—will catch consumers’ eyes, and the company’s business practices will then engender their loyalty. “By doing things differently—growing organically and locally, paying everyone a local wage, packing in compostable packaging—hopefully [our product] will stand out on the shelf,” Carter says.

He also hopes Smallhold’s relatively exotic offerings will encourage consumers to explore the breadth of amazing mushroom options that exist beyond buttons, such as king oysters, which are, in his opinion, one of the most underrated ’shrooms stateside. “They’re such a dynamic mushroom,” he says. “You can very easily make it into a center-of-the-plate kind of dish to replace meat.” In addition to king oysters, Carter says his team is doing research and development on a whole host of even less conventional ’shrooms, and he notes that while Smallhold’s main business is selling fresh mushrooms, there are opportunities beyond that market worth exploring, too. “Our ambition is to bring more people into the fungal kingdom,” he says.

Once they’re in, Carter notes just how deeply people tend to invest. Mushroom aficionados, he points out, tend to be hyper-engaged. “I'm always amazed at how obsessed people become,” he says. “I've been growing food for fifteen years, and there's no lettuce society, but there are mushroom societies in pretty much every city.”

Even if Smallhold’s newly converted consumers don’t go full fanatic, Carter believes small mindset shifts around mushrooms have the potential to be disruptive. The increasing popularity of ’shrooms is, he says, “the logical conclusion of the alt-protein movement,” which he believes can’t be sustainably dominated by processed alternative meats because they’re expensive, less healthy, and less eco-friendly than whole food options. “I see alt-meat as a stepping-stone to a more plant-based future,” he says. “Mushrooms are the next stage—they’re where I see the movement going.”

Hungry? Try this recipe from the Mushrooms in the Middle: A Smallhold Cookbook:

This impressive skillet pie is loosely inspired by spanakopita, but instead of spinach and feta, it is filled with roasted mushrooms and garlic, sweet caramelized onions, greens, and Gruyère. The mushroom mixture can be prepared up to three days in advance, then quickly assembled for weeknight dinner. Serve as a festive main dish with a simple lemony green salad on the side to cut through the rich pie. - Christina Chaey, Senior Food Editor at Bon Appétit

Place garlic cloves in the center of a small square of aluminum foil. Drizzle garlic with olive oil, then fold foil into a packet and add to baking sheet.

Roast mushrooms and garlic until mushrooms are browned and garlic is soft, about 20 minutes, turning mushrooms once after 15 minutes. Mash cloves with a fork and set aside. Reduce oven to 400°F.

Heat 2 Tbsp. oil in a 10" ovenproof skillet over medium-high heat. Add onions and cook, stirring occasionally and reducing heat as needed to prevent burning, until onions are deep golden brown and jammy, about 20 minutes.

Add vinegar to skillet and scrape up browned bits with a wooden spoon. Add a handful of greens and cook, stirring, until bright green and wilted, about 30 seconds. Repeat with more handfuls of greens until everything is wilted; season with salt and pepper.

Add egg, heavy cream, and Gruyère to mushroom mixture, season with pepper, and stir to combine.

Brush skillet with a thin layer of olive oil. Working quickly but carefully, lay two sheets of phyllo on a work surface and lightly brush them with oil.

Overlap phyllo sheets to cover the bottom and sides of the pan (there should be some overhang). Repeat with remaining phyllo sheets. Evenly spread the mushroom mixture over phyllo. Fold phyllo overhang over filling, leaving center exposed, and gently brush overhang with oil.

Cook pie over medium heat until bottom of pastry is just golden, about 3 minutes. Transfer skillet to oven and bake pie until phyllo is golden brown and crisp and filling is set, 25-30 minutes. Let pie cool in skillet at least 15 minutes before slicing. Serve warm.