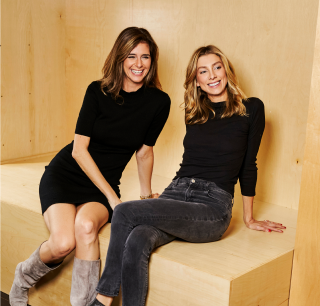 Sakoutis is currently harnessing this power with her longtime business partner, Erica Huss. After the entrepreneurs sold their trailblazing juice cleansing program BluePrint in 2013, they realized they’d both been taking supplemental 'shrooms daily to optimize their health. They felt the benefits of these mushrooms were "drastic" but found available formats like powders or capsules to be inconvenient and unpalatable. “Usually, when superfoods are ‘new,’ people are willing to choke them down for the sake of their promised health benefits,” Sakoutis says. “But we felt that the wellness industry had come far enough that consumers shouldn’t be asked to sacrifice on taste or convenience.”

Instead, the duo wondered if they could incorporate 'shrooms into consumers’ existing habits with unprecedented ease. And so began their second company, Earth & Star. “We decided to start with beverages since that was our heritage at BluePrint,” says Sakoutis. After much research and development, their vision manifested into actual products, which were as groundbreaking as their BluePrint predecessors: the first ready-to-drink lattes and cold brew coffee infused with functional 'shrooms.

Sakoutis and Huss selected the specific mushrooms incorporated into these beverages for their strong science-backed benefits. They added reishi to protect against stress, cordyceps for its fitness advantages, lion’s mane for its cognitive benefits, and chaga because it’s one of the most antioxidant-rich, immune-supportive superfoods on Earth. “We really tried to arrive at a formulation that was going to touch all of these major uses and needs,” says Huss.

After the successful launch of their lattes, the duo set to work planning expansion into other categories. “We want to be known as a mushroom platform,” Sakoutis says. “So we spent the better part of 2020 doing a lot of product development and came out with a handful of new verticals.” They’ve since launched functional mushroom-infused chocolates, ground coffee, tinctures and, most recently, a multi-mushroom daily gummy. In addition to the company's core four fungi, these newer products include additional shrooms, including immune-boosting turkey tail, skin-saving tremella, and heart-healthy maitake.

Each Earth & Star product includes 'shrooms at what Sakoutis emphasizes is, importantly, a therapeutic dosage of the mushroom’s fruiting body. This distinction separates the company from many, if not most, other functional mushroom brands on the market. “When things become a bit trendy and everyone starts adding a dash of this mushroom and a dash of that mushroom just for the sake of having it on their label, it does a disservice to the entire industry because there’s no efficacy,” says Sakoutis. “There is so much snake oil out there," cautions her cofounder.

According to Sakoutis and Huss, the most important thing consumers should keep in mind as they shop for any functional mushroom supplement is that if it’s not made specifically from the fruiting body, the part of the mushroom you see above ground, it’s not going to offer any benefits. Oftentimes, companies will grind the entire mushroom down and sell that as their supplement, labeling it as “full-spectrum.” Sakoutis considers this BS because including mycelium, the root-like structure of a mushroom, actually dilutes efficacy. “It’s going to contain only trace amounts of polysaccharides and beta-glucans, which are the compounds that give a mushroom its functionality,” she says.

As is true for all supplements, there are no regulations in place to guard against this practice, or even to require accurate ingredient labeling. “People are throwing just about anything in a pouch and calling it a mushroom powder,” says Sakoutis. "Sometimes they’re not even using mushroom extracts, [which means your body won't be able to reap any benefits]." Dosage matters, too. Products need to have a certain amount of mushroom extract in them if they're going to have any effect on your health. “A therapeutic dose is anywhere from 1,000 to 3,000 milligrams of mushrooms, and we typically use anywhere from 1,200 to 2,500 milligrams per serving across all of our SKUs,” says Sakoutis. “Sometimes brands won't even list an amount, so there could be next to nothing in their product.”

'Shroom quality and quantity aren’t the only standards the seasoned wellness-preneurs have set out to meet. It’s not easy to make a product shelf-stable without adding “a bunch of junk” to it, says Sakoutis, but she and Huss have endeavored to keep their label “super clean.” Everything in Earth & Star’s product line is certified organic, and there are no gums, seed oils, or sugar alcohols included in any of the company’s beverages. Taste has been an important consideration as well. “One of the number one questions any mushroom brand gets is ‘Does it taste like mushrooms?’” says Huss. “We want to make sure everyone understands that this is actually a delicious premium product that's simply boosted with functional mushroom extracts you can't taste—it’s not like cracking open a can of mushroom soup.”

With their tasty treats made from the highest quality ingredients, Huss and Sakoutis hope to convince people of the life-changing magic of non-magic (a.k.a. non-psychedelic) mushrooms. After all, as they like to say, "Science is like magic but real," and functional fungi are one of a few wellness trends with a significant amount of research backing their benefits. “It's not like mushrooms haven't been studied, and we don’t have facts to back up claims that sometimes sound a little too magical,” says Huss. “I know that when you start rattling off the benefits of mushrooms, people are just like…‘Really? How are they all of those things?’ But they are.”