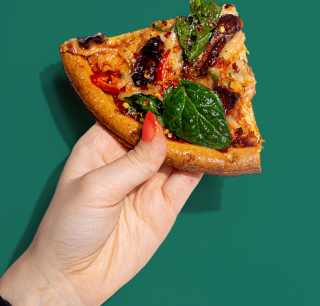 This sustainable snack surpasses its beef-based inspiration—and you can cook with it, too!

Real Talk: The healthy snack category can sometimes seem like a joke. Baked beet chips, while tasty in their own way, are just not equivalent to their salty, fried and greasy, finger-licking good potato counterparts. Full stop. And it certainly takes some magical thinking to believe an edamame burger is completely comparable to the juicy beef version that warrants hours spent waiting in the In-N-Out drive-through. But one new company has actually managed to create a better-for-you-and-the-environment plant-based snack that surpasses its inspiration to become even more crave-able than the original, and its key ingredient is—you guessed it!—mushrooms. Meet Moku Foods, maker of an addictive new meat-free jerky.

Moku founder Matt Feldman first became aware of the environmental impact of animal agriculture (a.k.a. meat) at an early age. Growing his own food on the Hawaiian island of Oahu as a young boy made him acutely aware of the impact of food production on the Earth. He distinctly remembers the day he discovered how much water it takes to create a hamburger, and from that point forward, he knew he wanted to help transform modern diets to be gentler on the planet. “In Hawaii we say ‘mālama i ka 'āina,’ which means, ‘Take care of the land, and the land will take care of us,’” he says.

Around the same time, Feldman became interested in the nutritional benefits of mushrooms. Eventually, he decided to try his hand at creating a mushroom jerky to replace status-quo jerkies made from beef and other animal products that carry hefty environmental footprints. After much trial-and-error in his own kitchen, he partnered with the Michelin-starred chef Thomas Bowman to create Moku’s inaugural product, a jerky made from just three major ingredients: king oyster mushrooms, coconut aminos, and chickpea miso. It launched in 2021, and Moku sold 180,000 bags of jerky that year.

This isn’t hard to fathom once you’ve tasted Moku jerky. The grab-and-go snack is compulsively munchable and unbelievably similar in texture and taste to more standard forms of jerky, with an additional umami that’ll leave you craving more. Skeptical? Check out this adorable review.
‍

Moku is super good for you, too. One bag contains nine grams of fiber and six grams of protein, not to mention all the health benefits of its main ingredient, the oyster mushroom. It's also eco-friendly AF. That same single bag saves 12 square feet of land, 107 gallons of water, and 11 pounds of methane when compared to traditional beef jerky. And there's another reason to feel good about scarfing these snacks as well. Feldman donates one percent of sales to sustainability-focused nonprofits, including GrowGood, Herbicide Free Campus, Waipa Foundation, and Aloha Harvest.

Moku jerky is currently available in three flavors, Original, Sweet & Spicy, and Hawaiian Teriyaki. Feldman plans to release three new surprise flavors in September and a new product he describes as being “in the same category as our jerky but much higher in protein” in December. He doesn't intend to stop with that snack, either. “I’m here to reimagine the pantry using mushrooms,” he says.

Shop Moku now to switch to a snack that’s better for you, the planet, and all the planet’s people. 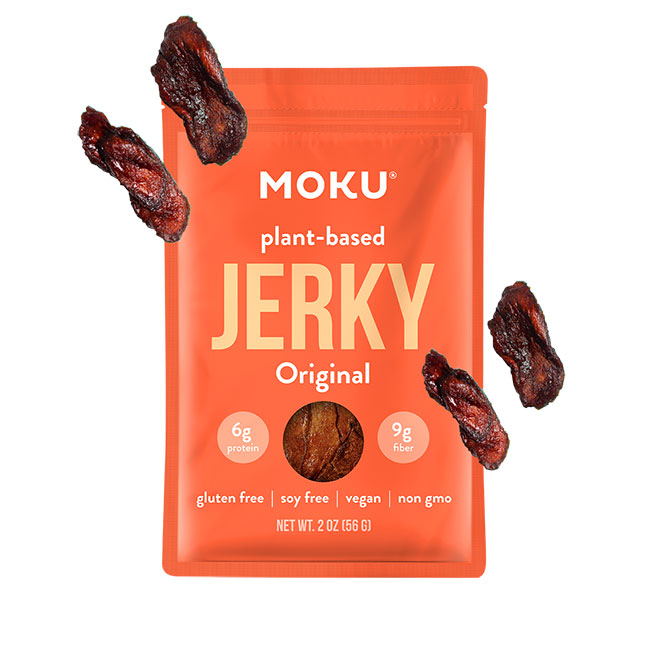 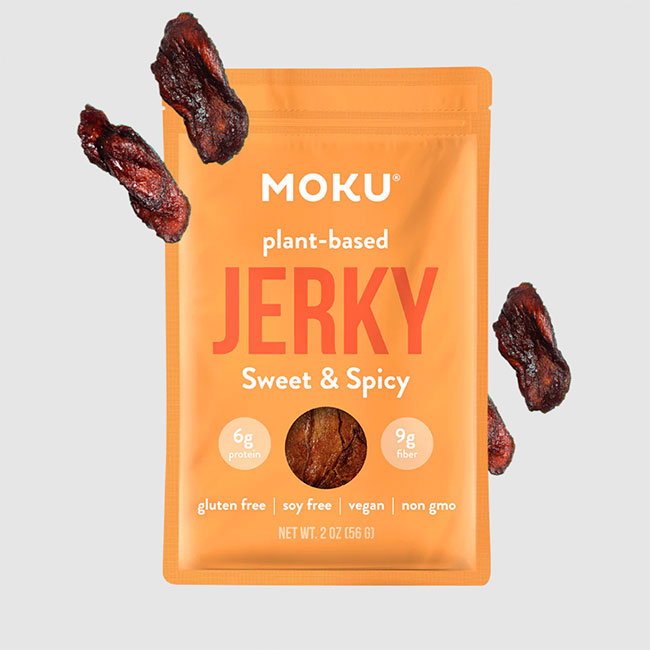 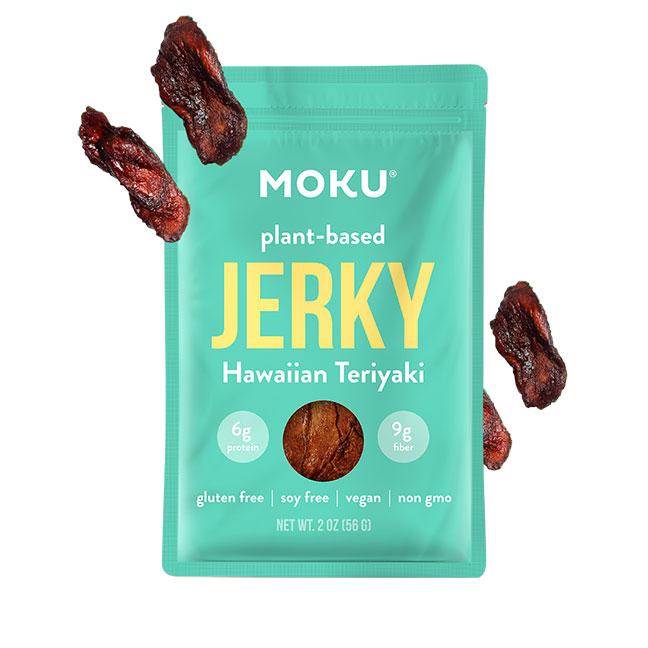 This flavor, which tips its hat to the founder’s hometown in Hawaii, is a Shroomboom favorite. If you like teriyaki (who doesn’t?), you’ll need to buy these babies in bulk.

Wait, there’s more! You can cook with Moku, too. Try your hand at the recipes below.